Three Men in a Boat - with a cheese 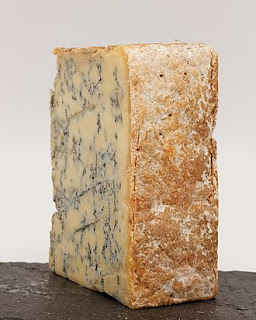 In 1889 the famous book Three Men in a Boat was written by Jerome K. Jerome. The book was about three men who go on a boating holiday up the Thames. As they are preparing to set off the three men discuss what foods they should take with them. One of the men, Harris, suggests taking a whole cheese that they can carve at as they row. Another, George, objects. The narrator then tells of the time that he had an unpleasant encounter with some cheeses. He does not name the cheeses, but if they were Stilton’s they must have been well past their best. The book continues:

I remember a friend of mine, buying a couple of cheeses at Liverpool. Splendid cheeses they were, ripe and mellow, and with a two hundred horse-power scent about them that might have been warranted to carry three miles, and knock a man over at two hundred yards. I was in Liverpool at the time, and my friend said that if I didn’t mind he would get me to take them back with me to London, as he should not be coming up for a day or two himself, and he did not think the cheeses ought to be kept much longer.

I called for the cheeses, and took them away in a cab. It was a ramshackle affair, dragged along by a knock-kneed, broken-winded somnambulist, which his owner, in a moment of enthusiasm, during conversation, referred to as a horse. I put the cheeses on the top, and we started off at a shamble that would have done credit to the swiftest steam-roller ever built, and all went merry as a funeral bell, until we turned the corner. There, the wind carried a whiff from the cheeses full on to our steed. It woke him up, and, with a snort of terror, he dashed off at three miles an hour. The wind still blew in his direction, and before we reached the end of the street he was laying himself out at the rate of nearly four miles an hour, leaving the cripples and stout old ladies simply nowhere.

It took two porters as well as the driver to hold him in at the station; and I do not think they would have done it, even then, had not one of the men had the presence of mind to put a handkerchief over his nose, and to light a bit of brown paper.

I took my ticket, and marched proudly up the platform, with my cheeses, the people falling back respectfully on either side. The train was crowded, and I had to get into a carriage where there were already seven other people. One crusty old gentleman objected, but I got in, notwithstanding; and, putting my cheeses upon the rack, squeezed down with a pleasant smile, and said it was a warm day.

A few moments passed, and then the old gentleman began to fidget.

“Very close in here,” he said.

“Quite oppressive,” said the man next him.

And then they both began sniffing, and, at the third sniff, they caught it right on the chest, and rose up without another word and went out. And then a stout lady got up, and said it was disgraceful that a respectable married woman should be harried about in this way, and gathered up a bag and eight parcels and went. The remaining four passengers sat on for a while, until a solemn-looking man in the corner, who, from his dress and general appearance, seemed to belong to the undertaker class, said it put him in mind of dead baby; and the other three passengers tried to get out of the door at the same time, and hurt themselves.

I smiled at the gentleman, and said I thought we were going to have the carriage to ourselves; and he laughed pleasantly, and said that some people made such a fuss over a little thing. But even he grew strangely depressed after we had started, and so, when we reached Crewe, I asked him to come and have a drink. He accepted, and we forced our way into the buffet, where we yelled, and stamped, and waved our umbrellas for a quarter of an hour; and then a young lady came, and asked us if we wanted anything.

“What’s yours?” I said, turning to my friend.

“I’ll have half-a-crown’s worth of brandy, neat, if you please, miss,” he responded.

And he went off quietly after he had drunk it and got into another carriage, which I thought mean.

From Crewe I had the compartment to myself, though the train was crowded. As we drew up at the different stations, the people, seeing my empty carriage, would rush for it. “Here y’ are, Maria; come along, plenty of room.” “All right, Tom; we’ll get in here,” they would shout. And they would run along, carrying heavy bags, and fight round the door to get in first. And one would open the door and mount the steps, and stagger back into the arms of the man behind him; and they would all come and have a sniff, and then droop off and squeeze into other carriages, or pay the difference and go first.

From Euston, I took the cheeses down to my friend’s house. When his wife came into the room she smelt round for an instant. Then she said:

“It’s cheeses. Tom bought them in Liverpool, and asked me to bring them up with me.”

And I added that I hoped she understood that it had nothing to do with me; and she said that she was sure of that, but that she would speak to Tom about it when he came back.

My friend was detained in Liverpool longer than he expected; and, three days later, as he hadn’t returned home, his wife called on me. She said:

“What did Tom say about those cheeses?”

I replied that he had directed they were to be kept in a moist place, and that nobody was to touch them.

“Nobody’s likely to touch them. Had he smelt them?”

I thought he had, and added that he seemed greatly attached to them.

“You think he would be upset,” she queried, “if I gave a man a sovereign to take them away and bury them?”

I answered that I thought he would never smile again.

An idea struck her. She said:

“Do you mind keeping them for him? Let me send them round to you.”

“Madam,” I replied, “for myself I like the smell of cheese, and the journey the other day with them from Liverpool I shall ever look back upon as a happy ending to a pleasant holiday. But, in this world, we must consider others. The lady under whose roof I have the honour of residing is a widow, and, for all I know, possibly an orphan too. She has a strong, I may say an eloquent, objection to being what she terms `put upon.’ The presence of your husband’s cheeses in her house she would, I instinctively feel, regard as a `put upon’; and it shall never be said that I put upon the widow and the orphan.”

“Very well, then,” said my friend’s wife, rising, “all I have to say is, that I shall take the children and go to an hotel until those cheeses are eaten. I decline to live any longer in the same house with them.”

She kept her word, leaving the place in charge of the charwoman, who, when asked if she could stand the smell, replied, “What smell?” and who, when taken close to the cheeses and told to sniff hard, said she could detect a faint odour of melons. It was argued from this that little injury could result to the woman from the atmosphere, and she was left.

The hotel bill came to fifteen guineas; and my friend, after reckoning everything up, found that the cheeses had cost him eight-and-sixpence a pound. He said he dearly loved a bit of cheese, but it was beyond his means; so he determined to get rid of them. He threw them into the canal; but had to fish them out again, as the bargemen complained. They said it made them feel quite faint. And, after that, he took them one dark night and left them in the parish mortuary. But the coroner discovered them, and made a fearful fuss.

He said it was a plot to deprive him of his living by waking up the corpses.

My friend got rid of them, at last, by taking them down to a sea-side town, and burying them on the beach. It gained the place quite a reputation. Visitors said they had never noticed before how strong the air was, and weak-chested and consumptive people used to throng there for years afterwards.

Fond as I am of cheese, therefore, I hold that George was right in declining to take any.”

Posted by Rupert Matthews at 06:33