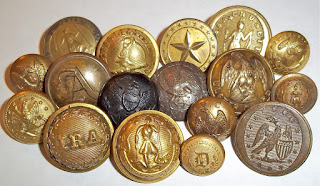 Today I kept a U3A group spellbound for well over an hour with my talk on the "History of Buttons".

Today we take buttons very much for granted. When we buy a new outfit it comes with buttons attached, and when we discard the clothes the buttons go with it. But this very familiarity has bred contempt for what is really a highly sophisticated bit of practical clothing. This books starts back in antiquity before buttons were invented to show how our ancestors had problems keeping their clothing done up – and even on their persons. The invention of buttons is covered, along with the various innovations in fashion that followed rapidly. The talk also looks at the different types of button used over the centuries and at the very special uses to which buttons have been put by the fashion-conscious, spies, the military and the pearly kings and queens of London before finishing with a word about modern fashion etiquette that would be impossible without buttons.

Today's audience were especially interested in the Pearly Kings and Queens of London's East end.

The practice of wearing clothes decorated with mother of pearl buttons is first associated with Henry Croft (1861-1930), an orphan street sweeper who collected money for charity. At the time, London costermongers (street traders) were in the habit of wearing trousers decorated at the seams with pearl buttons . In the late 1870s, Croft adapted this to create a pearly suit to draw attention to himself and aid his fund-raising activities. In 1911 an organised pearly society was formed in London.

A memorial statue of Henry Croft was donated by the Hospitals, societies, and other charitable organisations Henry had helped in his lifetime. The statue was placed in Finchley Cemetery where Henry was buried, but after it was vandalised was moved to the Crypt of St Martins In The Fields. 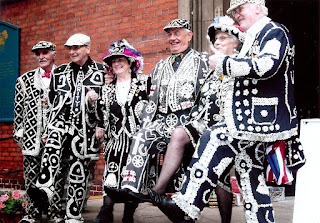 I have a wide variety of talks to give via Zoom - or in real life when restrictions are lifted. Find out moere on my website.

Posted by Rupert Matthews at 08:42