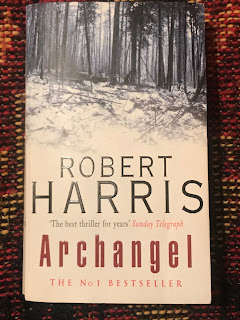 Yet another book set in Russia, what has got into me?

As you might expect from Harris, this is a solidly researched and gripping thriller. There is plenty of local colour - almost enough to make this useful as a travel book! The places that the action covers are beautifully described with bags of detail and background. The situation in Russia at the time this was written  is well described. Even to the point of predicting the rise of a native hard man to power well before Putin came along.

The story line is good with plenty of twists and turns along the way. And the action is very much driven by the characters of the main players - which is not always the case with political thrillers. I particularly liked Mamantov, the old-style Communist hard man. A real thug, but astonishingly well drawn and his actions through the book, while apparently background, are driven by his character and as the plot unfolds turn out to be absolutely central to the final outcome. It must be said that the final few pages of the book came as a surprise to me, and I had been paying attention.

Posted by Rupert Matthews at 03:51 No comments: 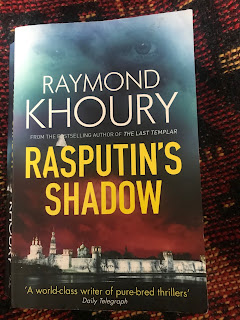 I quite enjoyed this book. It is a pacey little adventure thriller with twists and turns, good characters and exciting chases and intriguing puzzles. All very good. Mind you, the plot had a number of holes in it and a few non-sequiters. In part this might be because I have not read the previous books in the series, so what seemed to me to be an odd plot dead end might actually make total sense if you've read the series.

Anyway, the writer did a good job of making me care about the main characters. Even the villain was a great creation. In fact I felt quite sorry when he got his comeuppance, as I was rather wishing that he would escape and get away with his dastardly plotting. He should have been kept available to make a come back in a later novel in the series. Oh well.

My main complaint was about the Rasputin element. Every now and then we slipped off for a chapter or two taking place in the early 20th century. These were supposed to be giving us helpful background information on the mysterious MacGuffin, but in fact is rather unnecessary as the fugitive scientist does a pretty good job of describing it towards the end of the book. I wonder if this book began as a straightforward thriller, but at some point somebody decided that it needed a mysterious historical element chucked in - and they hit upon the idea of Rasputin having used the MacGuffin a century before the current villain does so.

Never mind. Ignore the Rasputin stuff and this is a cracking adventure novel.
Posted by Rupert Matthews at 04:41 No comments: