Within 7 weeks they were all dead 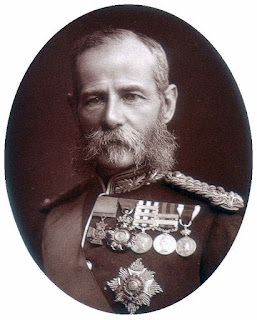 I'm reading the memoirs of Earl Roberts of Kandahar - the famous "Bobs" of the Victorian military. It is a long book and well written - but I'll write a review of it when I have finished ploughing through the pages. For now I want to comment on a quite remarkable throwaway line that occurs early in the book.

Roberts is writing about the Indian Mutiny [as it was called when I was at school] and his role in it. He mentions that as a junior officer in the Quartermaster's department he was in Umballa in the early days of the uprising. He recounts a meeting that was summoned by the Commander in Chief of the British army in India - General George Anson. Present were the top five military officers in the Punjab plus their aides. Secrecy was vital so nobody else was allowed in and guards were posted outside. Roberts himself was hanging about nearby awaiting what decision would be made so that he could start his task of allocating supplies to different units. In due course the meeting ended with a decision to form a mobile column of reliable troops that would march through the Punjab to rescue isolated outposts.

Roberts then makes a remark that I found to be quite astonishing. It is a noteworthy fact, he says, that every man who was in that room would be dead within seven weeks.

We are accustomed to senior military officers spending their time far behind the lines, safe and secure. Casualties among generals are, today, rare to the point of being unthinkable. And yet here are the top five military commanders of the British army in northern India all killed within a few weeks.

Now to be fair, Anson himself succumbed to cholera rather than enemy bullets. But even so that is quite astonishing. Almost as astonishing is the fact that Roberts did not find this fact to be as remarkable as I do. It was worth commenting on, but only as a throwaway line. Casualties among generals and brigadiers was obviously only to be expected.

Clearly being a senior military commander in the 1850s was a dangerous job.

Posted by Rupert Matthews at 02:29 No comments:


For a work project I’ve been reading through the Duke of Wellington’s official correspondence with the government back in the UK during the Peninsular War. As you might imagine most of this is fairly routine, but one very dramatic dispute flared up in the winter of 1812-13. And just for once the Duke did not get his way.

The point at issue was the uniform of the British light dragoon regiments serving with Wellington in Portugal and Spain. The arguments raged back and forth for months, and set me thinking about what uniforms were meant to do. What purpose do they serve?

But before moving on the more generic issues of uniforms, lets have a look at the dispute between Wellington and the Army HQ.

Until the autumn of 1812, British light dragoons wore a distinctive and rather attractive uniform. The trousers and jacket were dark blue with white detailing, the boots were black and of the Hessian style.  Each regiment had its own colour, which featured on the collar and cuffs. As ever the uniforms of the officers was more ornate than that of the other ranks, with additional embroidery and silver buttons.

The headgear of the British light dragoons was known as the Tarleton helmet, named for the officer who had invented it. It consisted of a rounded helmet and peak over the eyes, both made from leather boiled in chemicals to make it exceptionally hard – tough enough to turn a sword blade. Along the top, running from front to back, was a fur crest. Officers sported a feather plume on the left side and a coloured cloth – called a “turban” – tied around the base of the helmet.

This Tarleton helmet was unique, used by no other nation, and highly distinctive.

Then the headquarters of the British Army wrote to Wellington telling him that the light dragoon uniform was changing. The blue trousers and jacket were staying, but instead of white detailing, the jacket was now to have a broad plastron in the regimental colour. A plastron is a piece of cloth that covers the front of a jacket, being buttoned down both sides and along the top. This annoyed Wellington as from the front the jacket no longer looked blue, but red, yellow, white or whatever the regimental colour might be.

The problem here was that Wellington was facing not only French troops, but also those of the allies of the French such as the Neapolitans, Wurttemburgers, Bavarians and so forth. The light cavalry of these states wore jackets of a variety of colours. Confusion was almost inevitable.

Even worse, HQ wanted to get rid of the Tarleton helmet and replace it with a shako that flared out at the top. The shako was made of felt with a leather peak. This was considerably less effective at giving the wearer protection against enemy sabres, but it was the shape that annoyed Wellington. The new-style light cavalry shako was exactly the same shape as that of the French light cavalry. Combined with the new plastron, the shako gave the British light cavalry a very similar appearance to their enemies.

He fired off an immediate reply pointing out that the light cavalry often operated miles from the main army as they scouted around. It was essential, he said, that the uniform of the light cavalry could be recognised at a distance – often several miles away. The old all-blue uniform with Tarleton helmet was quite unlike anything else in Spain. But the new plastron and shako uniform could easily be mistaken for many other light cavalry uniforms worn by the enemy.

Army HQ was unmoved – possibly in part because the Prince Regent loved the more modern and more colourful uniform. Correspondence went back and forth, but in the end the new uniforms were issued in time for the campaigning season of 1813.

The point at issue here had been the appearance of the uniform – and in particular its appearance at a distance. Wellington was particularly annoyed by the change in the silhouette of the headgear, but the coloured plastrons also caused confusion.

Clearly one of the key functions of a uniform is to identify the wearer. In an army, that primarily means identifying the army to which he belongs. Details within the uniform give the rank, unit and specialist skills of the wearer.

In civilian life uniforms can be used to identify a police officer, firefighter, paramedic, judge or other profession. In all cases, the appearance of the uniform must be instantly recognisable to anyone who sees it. Given that many of these civilian uniforms are worn by emergency services, there is no point in wearing a uniform that requires a person to read words or look for detail. A police uniform must look very different from a paramedic, and both must be very different from civilian mufti.

As with Wellington’s light dragoons, silhouette is crucial. A police helmet is distinctive and can be recognised at a great distance. Similarly the style of a police uniform and its blue colour needs to be distinct from that of others.

Of course there is far more to a uniform than its appearance. It must also be functional. Wellington’s soldiers were out in all weathers, day and night, for weeks on end. The opportunities for changing or washing were very limited. Police officers and firefighters, by contrast, may be out in terrible weather, but they are almost certainly able to look forward to a nice hot shower at the end of their shift, and a change into a clean set of clothes before they go on duty again. As a result modern day emergency services uniforms do not need to be as robust as those of Wellington’s soldiers.

And most police officers have a car or motorbike nearby where equipment can be kept, obviating  the need for all the packs, pouches and bags that soldiers used to lug about with them.

Nevertheless, some features of uniforms remain that same as they always were. 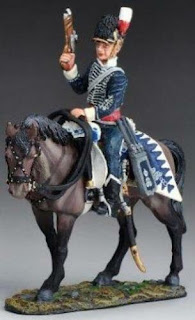 Posted by Rupert Matthews at 02:43 No comments: