The Kingdom of Kent throws off Mercian overlordship AD775 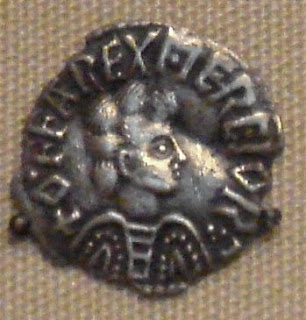 In 764 King Eanmund of Kent died and was replaced by two joint kings: Heabert and Egbert II.
Offa himself travelled down to Canterbury in 764 to attend the coronations. The method by which the people of Kent chose a new king is not entirely clear, but it seems to have been the nobles who had the right to appoint a new ruler, though they had to choose an adult man from among the ranks of the ruling dynasty, the Eskings. Kent had seen joint kings before, there being a long standing division between east Kent and west Kent, with the River Medway marking the boundary. Usually one of the joint kings was the acknowledged senior with the junior ruler concentrating on his own lands and steering clear of international or church matters.
A coin of Offa showing him in armour, but bareheaded. The inscription describes him as "Rex Mercior" or King of Mercia.

There is some evidence that it was Offa who had chosen the new joint kings. It may be that he came to Kent not to attend the celebrations but to ensure that his placemen got chosen.
While he was there, Offa chose to demonstrate his overlordship of Kent in a very solid fashion. King Heabert granted some land to the Bishop of Rochester. It was usual when this happened for the title deeds, or charter, to be signed by the ruling King and witnessed by whichever nobles and clerics were around at the time and had learned to read and write well enough to sign their names and, hopefully, have read the charter. This particular charter, however, was signed not by Heabert, but by Offa. Heabert signed as a mere witness among others though he did describe himself as King of Kent when he did so. One name noticeably absent was that of the new King Egbert II.
When Egbert did choose to act he did so on his own account. Some months after Offa had gone back to Mercia, Egbert chose to have a charter confirmed by King Heabert, implying that it was Heabert who was the senior ruler. Offa's name is nowhere to be seen. One name that does appear as a witness is that of Jaenbert, Abbot of St Augustine's Abbey in Canterbury. The following year Bregowine, Archbishop of Canterbury, died and Jaenbert was elected to succeed him. A few months later Heabert died and Egbert II became sole King of Kent.
All appeared calm, with Offa clearly having the upper hand over Kent. But ten years later he overstepped the mark. In 774 Offa called a meeting of Mercian churchmen and Archbishop Jaenbert went along to officiate as was his right. Travelling with Jaenbert was a nobleman named Baban, who may have been acting as observer for Egbert II or who may have been there on his own business.
At the meeting Offa decided to give some land he owned to the Archbishopric of Canterbury. Jaenbert was, naturally, pleased but Baban was not. Although the land belonged to Offa the taxes on it were owed to Egbert II and so Offa should have asked Egbert for permission to transfer the land. He did not, he simply signed the charter and when Baban objected told him that Egbert would have to accept the situation.
When the news reached Egbert he was predictably furious. Offa had acted as if he, not Egbert, were King of Kent. Having an overlord living miles away in Mercia was one thing. Having an overlord who issued orders to you, expected to have them obeyed and then insulted your dignity was something quite different.
It was not only Egbert who was enraged, the Kentish nobles were incensed as well. Egbert was from their own royal family, was related to many of them and had been chosen by them. Offa was a foreigner with no links to Kent at all. While they could expect to have some influence over a local king, they could have none over Offa. Jaenbert was also unimpressed. It suited the Archbishops of Canterbury to be ruled by a local king who could be influenced by them rather than to have a powerful but remote monarch.
In 775 Egbert threw off Offa's overlordship. He began ruling in his own right, making no reference to Offa and not seeking to have new laws or taxes approved by his supposed overlord. In his turn Offa could not afford to let this rebellion, as he saw it, go unpunished. He gathered an army and in 776 sent it south to invade Kent.

Despite the various handicaps of the Spanish army, it did have some great strengths. The first of these was numbers. When the French invaded, the Spanish army numbered over 100,000 regulars - a substantial force by anyone's measure. Throughout the war, recruitment into the army never lacked men so despite repeated defeats and losses the Spanish army ended the war almost as large as it began it. Aiding this trend was the fact that Spanish soldiers had the habit of walking off home after a defeat to hide their weapons and uniforms from prying French eyes. When a new army was being raised, the former soldiers would put back on their uniforms, grab their weapons and go back to the army. The French found it bewildering how an area could be devoid of Spanish troops one day, but swarming with them the next. Once they realised what was happening, of course, it made them suspicious of Spanish civilians and prone to take reprisals.
The other advantage the Spanish army had was a great willingness among the men to fight the French. The behaviour of the French armies played a large part in this. At its best, the French army stole food wherever it went, more usually the men looted anything of value and in several notorious cases indulged in murder and rape on a large scale. When the French captured Oporto in March 1809 about 5,000 civilians died, much of the city went up in flames and few women escaped rape. Spanish resentment against the French quickly turned to a hatred that explains why Spanish armies were usually so keen to attack the French, and so reluctant to take prisoners.

Posted by Rupert Matthews at 06:04 No comments: 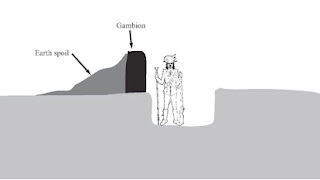 A cross section of a parallel trench as dug by an attacker. The spoil heap and gambion hid the men in the trench from view and protected them against incoming bullets.

Since it was clearly impossible to march across the cleared killing field, the first move of any attacking commander was to find another way. That meant digging trenches. The first trench to be dug was the First Parallel. This was dug parallel to the defensive wall to be assaulted, hence its name. It was positioned right at the maximum range of the cannon on the walls. The main purpose was to conceal the movements of the attacking troops from the watchers on the defences, though it was also proof against cannonballs and so provided real shelter for the men.
The digging of trenches was a skilled and arduous business. Generally a team of five skilled men was employed, with a dozen or more unskilled men attached to do the heavy lifting work. The first men crawled forwards on hands and knees protected behind a heavy wooden shield that was mounted on wheels. The shield was pushed forward a few inches, then wedged in position. Behind it the men dug a trench about a foot deep and two feet wide. The earth from this was piled into a large wickerwork basket called a gabion. When packed with earth a gabion was strong enough to withstand bullets or small cannonballs. Once the this was done, the shield was pushed forward a bit further and the process began again.
Meanwhile a second team moved in to do more digging, deepening the trench to around two feet and widening it to three feet. The earth was likewise piled up into the gabion. The third team enlarged the trench further and completed the filling of the gabion. A fourth team arrived to deepen the trench so much that a man could walk along it in safety without bending down. The spare earth was thrown over the top of the gabion to form a spoil heap to protect its front. The fifth team widened the trench to be about six feet wide so that men could pass each other without difficulty, the earth being also thrown over the gabions. The trench was often finished off by having fascines of twigs piled up on top of the gabions to make it difficult for men from the besieged fortress to launch surprise raids on the trenches.
Posted by Rupert Matthews at 05:58 No comments:

Phillip II of Macedon changes the organisation of his army 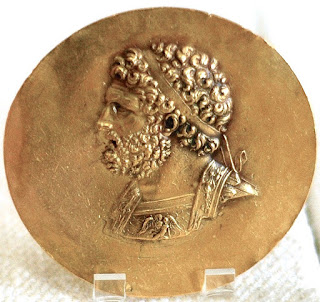 Philip inherited a decimal organisation for his army, with men grouped in units of ten. He changed that to a system based on 16, though he kept the old name of dekas to describe each of these units - a fact that has caused great confusion. This dekas was the basis of pezhetairoi organisation both on the march and in battle. In camp, each dekas shared a camp fire, cooking utensils and rations. The tents of the dekas were pitched close to each other in two rows facing the fire.
Each dekas was led by a man called a dekadarch, who was paid twice as much as the others. He seems to have been responsible for ensuring that his men kept their equipment in good condition and for reporting any lapses of discipline to an officer. There was also a man called a dimoirites and two called dekastateros, whose duties seem to have been restricted to the battlefield.
Each dekas also had a slave and, at least some of the time, a mule or packhorse. This man and his animal were responsible for transporting the equipment needed by the 16 men. This included the tents, the cooking gear, a bowl and cloak for each man, an earthenware pot in which was carried smouldering embers to light the campfire and enough food for up to 10 days.
The pezhetairoi were organised into units, known as lochos, each of which was composed of 32 dekas, or 512 men plus a trumpeter, a signaller and four or more officers. The senior officer is thought to have been mounted so that he could see over the heads of his men.
This lochos was the smallest formation available to the pezhetairoi phalanx. On an administrative level it was the basis for the issuing of pay and supplies and was the smallest unit over which a nobleman had command.
Posted by Rupert Matthews at 05:35 No comments: 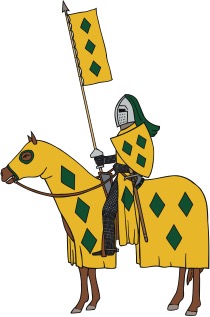 Towards the end of this period knights were dressed as is this figure here. The mail is now a tight-fitting suit that includes boots and gauntlets. The helmet is smooth and rounded to deflect blows and has a visor over the face that can be lifted up to make breathing easier when not in actual combat. The oblong pennant on the lance shows that this man is a "knight-banneret", that is a knight who has been given permission by his lord to carry this sort of a decoration. Such permission was usually won by a feat of valour in battle and gave the knight prestige among his fellows.
Posted by Rupert Matthews at 05:30 No comments: