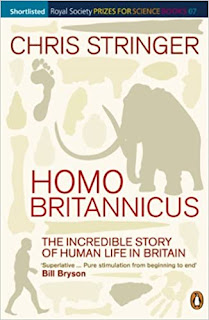 This is an interesting book about the prehistory of humanity in the British Isles.
It tells the epic history of life in Britain, from man's very first footsteps to the present day.  Chris Stringer describes times when Britain was so tropical that man lived alongside hippos and sabre tooth tiger, times so cold we shared this land with reindeer and mammoth, and times colder still when we were forced to flee altogether. TThe Ancient Human Occupation of Britain project, led by Chris, has made discoveries that have stunned the world, pushing back the earliest date of arrival to 700,000 years ago. Our ancestors have been fighting a dramatic battle for survival here ever since.
I have a few quibbles about the tone of the book. IN places it reads a bit like a pitch for more funding for his research rather than a dispassionate account. But I guess that is one side of academia these days.

Posted by Rupert Matthews at 09:54