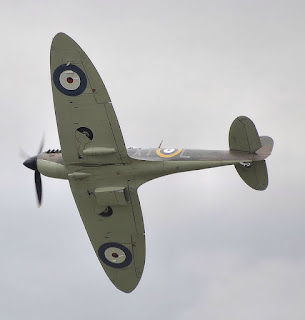 That bomb craters could be a real hazard was discovered to his apparent cost by Sergeant Ronald Hamlyn just after dawn on 23 August. The Spitfire had a notoriously long nose. This was not much of a problem in the air, but on the ground with the aircraft angled upward it meant the pilot had very little forward vision. Pilots were supposed to move forward in a series of sweeping turns so that the could peer around the engine cowling. As he taxied out to take off on patrol, Sergeant Hamlyn omitted to do this and drove his Spitfire straight into a bomb crater. The undercarriage was wrecked and the propeller sheared off, so that it would take days to repair the aircraft.

Hamlyn was sent to report to the Station Commander for disciplinary action. He was standing in the Commander’s ante room when at 8.25 he heard the emergency scramble bell. Hamlyn raced from the room and leapt into the cockpit of the nearest Spitfire. He joined the squadron as they climbed towards Ramsgate to meet a formation of Junkers Ju88s escorted by 109s. Hamlyn shot down an 88, then sent a 109 spinning down out of control.

When the squadron landed, Hamlyn headed back to the Commander’s office for his disciplinary hearing. Barely had the meeting begun than the scramble signal sounded again. Hamlyn raced to leap into a Spitfire and took off at 11.35. This time the intruders were over Dover. Hamlyn got into a dogfight with a 109. When the German put his nose down and fled, Hamlyn followed. He finally caught up with the German over Calais, and sent it down into the sea.

For the third time Hamlyn reported for his hearing. This time the proceedings went ahead and the hapless pilot had just been found guilty of Negligence on Duty when the alert sounded once more. Following his comrades to the Isle of Sheppey, Hamlyn bagged two more German aircraft before returning to Biggin Hill.

This time Hamlyn returned to the Station Commander’s office rather grubby and extremely tired. The senior officer sternly told him that he was being fined £5 (then a fair amount of money) for his crime – and that he was being recommended for the DFM. The medal was awarded immediately.

Posted by Rupert Matthews at 06:26