Introduction - The Battlefield of Prestonpans 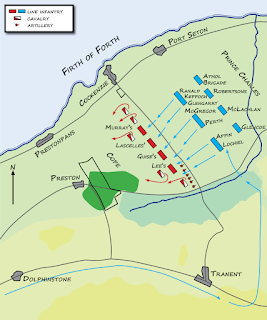 The Battle of Prestonpans was fought on 21 September 1745. It was one of the most dramatic battles ever to be fought on British soil. By any objective measure, the result should have been an easy victory for the government forces, but by skill, courage and some luck the forces of Bonnie Prince Charlie swept all before them. This was a triumph for the Jacobites and a crushing blow to the hopes of the government that the rising would be put down quickly. The followers of Bonnie Prince Charlie were called "Jacobites" as they supported the claim of his father James to be King of Britain, "Jacobus" being Latin for "James".

The previous Jacobite uprisings of 1689 and 1715 had both, after initial inconclusive battles, fizzled out fairly quickly. But "The '45", as it became known, was to be a very much more serious affair. The results were to be momentous. Once Bonnie Prince Charlie had won at Prestonpans supporters flocked to his standard. While some military men advised staying in Scotland to raise money, men and munitions, while luring the Government to fight the next battle on ground of the rebels' choosing, Bonnie Prince Charlie decided to invade England with the forces at his disposal.

That invasion was to end at Derby and the Jacobites began the long retreat that was to end on the moor of Culloden in utter and total defeat. The deliberate destruction of the Highland way of life and culture that followed would have devastating effects on the clans, whether they had chosen to rise and follow Charlie or to remain at home.

Without the stunning victory at Prestonpans it is likely The '45 would have fizzled out much as had The '89 and The '15. Instead, Bonnie Prince Charlie swept on only to lead his followers to destruction. No doubt change would have come to the Highlands eventually, but it would have been slower, less violent and driven by the Highlanders themselves. As it was an entire culture was smashed and destroyed.

The two armies that met at Prestonpans could not have been more different. The Government army was modern, professional and beautifully equipped. It was led by a full time army officer with more than two decades of experience on the major battlefields of Europe. The Jacobite army was composed of farmers, herdsmen and craftsmen who had enjoyed no military training at all. They were led by a young Prince of charismatic charms but unproven abilities, assisted by a retired soldier who had not been in uniform for 25 years. The battle was in many ways a clash between not just two armies but between two cultures and two epochs. The Jacobite army was recruited, led and fought as if it were straight out of the Middle Ages. The Government Army was modern in every sense of the word, instilled with the values and teachings of the Age of Enlightenment.

The battle should have been a walkover for the modern, but in fact it was a total victory for the old. It was not only the British government that was stunned by the news from Prestonpans. All of Europe sat up and took notice. Generals, field marshals and war ministers began sifting through their manuals and textbooks looking for some sort of explanation for what had happened, and for a solution to the problem of how a rag-tag army of amateurs had trounced a fully modern army that was its equal in size.

And they shook their heads over the most amazing thing of all about the Battle of Prestonpans. From the moment the first shot was fired, to the time the battle ended, the whole affair had lasted just 14 minutes.

Posted by Rupert Matthews at 06:40