This walk starts at Tenterden railway station because it is both easy to find and has a car park attached. The station is no longer part of the national rail network, but is instead the northern terminus of the Kent and East Sussex Railway. This privately owned line runs steam trains for families and enthusiasts to Bodiam.

There had been plans for a railway to Tenterden from Ashford or Hastings as early as 1852, but various attempts all fell through either because the military wanted a more southerly route or because of worries that the financial returns would not justify the cost. In 1896, a new law came into effect allowing railways to be built to a lower engineering standard if they were intended for rural areas where light train loads and infrequent services could be expected. This allowed railway companies to build lines more cheaply, making routes to  small towns such as Tenterden more likely to be profitable.

The Rother Valley Railway, as the route was known, was approved almost at once and construction began within weeks. The line opened on 2 April 1900 running from the main line at Robertsbridge through Bodiam and Tenterden to Headcorn.

Although the line was at first a success, it began to lose money in the 1920s and by 1931 was heading for bankruptcy. A drastic reorganisation saw the line converted to using two Ford road busses mounted on metal railway wheels for passengers and cheaper goods wagons. The railway returned to a modest profit and was still struggling along when, along with all other railways in Britain, it was nationalised in 1948. The new British Railways decided it could do without such a minor line turning such small profits and closed it to passengers in 1954. The goods trains continued until 1961, but then they too were discontinued.

Almost at once a group of local railway enthusiasts put forward proposals to run the line as a part time holiday attraction. The government was unimpressed and laid its own plans to lift the track. Lengthy legal actions followed and after 13 years the Ministry of Transport finally gave way and agreed to sell the line to the charity set up by the enthusiasts. The ministry did, however, impose a condition. The line was to end at Bodiam so that the three level crossings between there and Robertsbridge would not be in use. The line reopened from Tenterden to Wittersham Road in 1973, but the need for expensive repair work to a bridge and other works meant that the full line to Bodiam did not open until 2000.

The line now runs steam trains and other excursions on most weekends of the year and on summer weekdays. There are also special days with various themes. These can vary at relatively short notice, so check the website on www.kesr.org.uk or phone the railway on 01580 762943  if you are intending to ride the trains.

Posted by Rupert Matthews at 04:58 No comments:

NEW BOOK - The Battle of Albuera

My friend Oliver Hayes has a new ebook out. 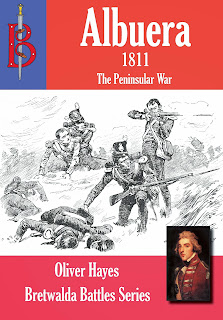 NEW BOOK - The Battle of Albuera

The Battle of Albuera was one of the bloodiest, and yet least decisive of the battles fought in the Peninsular War.

In the spring of 1811, the French armies in Portgual were in headlong retreat, falling back into Spain to regroup. As they fell back they left a powerful garrison in the great fortress town of Badajoz, soon put under siege by the British commander, Arthur Wellesley, better known by his later title of the Duke of Wellington.

French Marshal Soult gathered a large army to march to relieve Badajoz and restart the invasion of Portugal. At the village of Albuera, Soult ran into a mixed British-Portuguese-Spanish force under William Beresford placed there by Wellesley to block the road to Badajoz. What followed was one of the hardest fought battles of the entire Peninsular War.

Written by a military author of great experience, this book explains the way battles were fought two centuries ago and explains the course of the action in an accessible but authoritative style.

About the Author
Oliver Hayes is a military historian who has written extensively for books and magazines on different aspects of the military. He is now writing a series of books on the Peninsular War for Bretwalda Books.

Posted by Rupert Matthews at 02:34 No comments:

From Lympne head west along the B2067. This road has a low ridge to its north and the vast flat expanses of Romney Marsh to the south. In Roman times this was the very roughly the line of the coast. In later centuries, as the marshes began to form, the River Rother meandered across the flat lands. Just beyond the village of Hamstreet go straight across the A2070 and continue along the B2067 to Woodchurch. At Woodchurch turn right into the village, almost at once bearing left at a Y-junction. This lane passes the church, when you should see the windmill on top of the hill to the right.

Windmills were once a common feature of the English landscape. A form of windmill was developed in what is now Iran in around ad700, but this worked on a vertical shaft principle and was quite different from the more familiar form with a horizontal shaft and vertical sails. This form of windmill seems to have been developed in northwestern Europe in the 12th century. The earliest certain reference dates to 1191 when a windmill at Bury St Edmunds featured in a legal dispute. However, windmills were so widely spread across southern England and the Low Countries within a few years that it seems certain they had been invented at least as early as 1150.

These early windmills were of the post variety in which the whole structure is mounted on a stout wooden post and turned to face the wind. In around 1270, the tower windmill was developed. This had a round stone tower as its main structure. The sails were mounted on a wooden cap, which was alone turned to face the wind. This more robust structure meant that larger windmills with bigger sails could be built, in turn making the amount of power that could be capture much greater.

Throughout the medieval period, mills continued to be powered by water if a fast flowing stream was nearby, or by wind if not. A sudden ridge such as that by Lympne was ideal for a windmill. The flat marshes to the south provided no obstacle to the wind which swept in off the sea to power the windmills.

Posted by Rupert Matthews at 01:30 No comments: