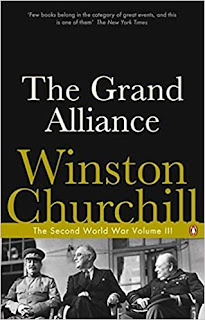 This is yet another volume in Churchill's memoirs of the Second World War. It covers the German invasion of Russia and the entrance of the USA into the war. As with the previous volumes in this series it blends together the great events of history, isolated anecdotes and Churchill's personal experiences. And it does so very well indeed. We learn about his trips overseas by ship and by aircraft, and how he very nearly didn't make it on one occasion.

This is very much a personal account, but that just makes it even more interesting. We learn about shortages [or otherwise] of food and drink on this travels, whihc aircraft were comfortable, and which were not. Churchill tells us what he thought of the people he had to deal with - and is always very tactful. I really got the impression that he was telling us the unvarnished truth - and if the truth was not flattering then he did not tell it.

I especially liked on anecdote about Montgomery. Monty was drafted in to command the 8th Army at the last minute when the chosen commander was killed. He had to be pulled out of the job that he was doing very successfully and bundled off to Cairo with almost no preparation. He was being driven to an airfield to be flown to North Africa with Alexander. Monty suddenly turned to Alexander and started talking about how desperately unlucky it was to be a successful general, commanding forces of men with talent and determination only to be suddenly and unexpectedly confronted by an unforeseen situation fraught with danger which would undoubtedly see the garlands of victory snatched from your shoulders as you are thrown into disaster through no fault of your own.  Alexander was taken aback by this sudden display of trepidation by the man being sent to command a major army in an offensive campaign. "Oh, come on," said Alexander. "Rommel won't turn out to be that bad." Monty stared at him in utter surprise. "I was talking about Rommel," he said. Great stuff!

Anyway, this is a highly readable book packed with observations and anecdotes that carries the reader along on a journey through a world at war. Buy it. Read it.

Winston S. Churchill (1874-1965) was prime minister of Great Britain from 1940 to 1945 and from 1951 to 1955. A prolific writer, whose works include The Second World War and A History of the English-Speaking Peoples, Churchill was awarded the Nobel Prize for Literature in 1953.
Posted by Rupert Matthews at 09:36 No comments: