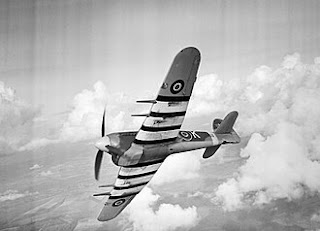 The more established airfields were still active, with Tangmere acting as a staging post for numerous squadrons coming in and out of the area. The Typhoons of No.266 (Rhodesia) Squadron was in residence for a while. Flying Officer Norham Lucas was lost to anti-aircraft fire while firing rockets during a low pass, or so his comrades thought when he failed to form up after the attack. In fact his aircraft had been badly damaged, but not destroyed. At low altitude he managed to keep the engine running long enough to get over the Channel and find a patrol boat. He then baled out and was picked up, to get back to Tangmere that evening.

Meanwhile the Poles were still in action, attacking ground targets with their bombs and guns. Le Havre was attacked on 21 May, Vacqueriette on 22 May and Douai on 24 May. Next day they hit Amiens, Criel on The 27 May, Bavinche on 28 may, Abbeville on 29 May and Grenflos on The 30 May.

The Wing had a day off operations on 31 May to receive a visit from Leigh-Mallory and Sir Arthur Coningham. Thus far the squadron had been operating only over occupied Europe, but it was confidently expected that at some point after D-Day they would get to within range of Germany itself. Naturally the Poles were keen to hit back at their enemy after their home country had been invaded, occupied and removed from the map. One of the Poles asked Coningham what the rules of engagement would be once over Germany. “Oh”, came the reply. “Just shoot at anything you see.”

This remark by Coningham led to some heated debate among the Poles as to whether they were supposed to target civilian women and children as well as military and industrial targets. Coningham was forced to send a telegram next day to explain that he had meant that the pilots could attack any bridge, truck or railway that they saw, not just those they had been briefed to attack. He finished by writing “If you do see Frau Goering hanging out the washing leave her to it while you concentrate on Fat Hermann.”

Posted by Rupert Matthews at 06:44