If the crew felt a captain was making bad decisions, they could hold a vote to elect a new captain to lead them. However, the old captain still owned the ship and his Articles (rules) remained in force.


Posted by Rupert Matthews at 03:06 No comments:

Who - or what - are the Cornish Piskies?

Who - or what - are the Cornish Piskies?


In the 19th and earlier 20th century folklorists were inclined to agree with AK Jenkin when he wrote “The piskies represent a folk-memory of an ancient race of inhabitants who were conquered by the Celts on their arrival in Cornwall, but who continued for long afterwards to lead a  furtive existence in the moorlands and cliffs, till finally they faded away altogether and were remembered only in old wives’ tales and tradition”. The fact that so many piskie tales were linked to old standing stones and similar ancient monuments might support this idea.

It is interesting to recall that the piskies of Cornwall were said to have defeated the fairies of England in a great battle on the banks of the River Parrett, which thereafter became the border between the two races of little people. It is known that in the year 658 the advancing English fought a battle against the Celtic kingdom of Dumnonia, that then included Cornwall, Devon and much of Dorset and Somerset. The English won the battle and a new border was drawn that ran along the Parrett. Was the firmly held belief about the piskies and fairies a recollection of this ancient war and treaty?

from "Mysterious Cornwall" by Rupert Matthews. 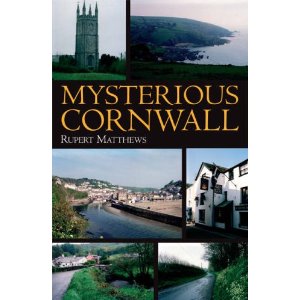 Posted by Rupert Matthews at 03:02 No comments: