The Battle of Hastings via Zoom 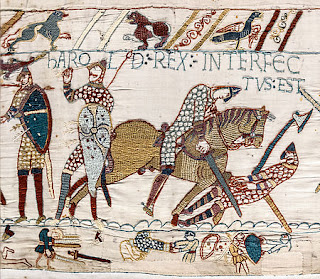 Yesterday I was delighted to give my talk on the Battle of Hastings to a Probus group via Zoom.

The year 1066 is the best known date in English history – and deservedly so. The defeat of King Harold Godwinson at the Battle of Hastings led to the total subjugation of England under the foreign dynasty of William of Normandy. English nobles were stripped of their titles and lands, English clergy ousted from their positions and even the English language itself driven from both Court and the courts. This talk looks at the build up to the battle to explain why it was fought, at the battle itself to explain how it was won and lost, and at the aftermath to show why this one battle had such devastating long-term results.

The members of the group asked some cracking questions. They were fascinated by the mystery surrounding the death of the heroic King Harold - as shown in this iconic scene from the Bayeux Tapestry.

There are two distinct accouns of Harold's death. Writing only a year or two after the battle, Guy of Poitiers names four Norman knights who killed Harold from horseback, while he was on foot and who then mutilated his body. Writing twenty years later Amatus of Montecassino says that Harold was hit in the eye by an arrow during the battle, but does not definitely give this as the cause of death. William of Malmesbury - writing in the 1120s and using official government documents as source material - states that Harold was killed by an arrow.

The traditional version of Harold's death, with him being killed by an arrow in the eye is a combination of Amatus' eye wound and William's death by arrow. Guy's account has traditionally been skated over by historians. More recently, however, Guy's version has gained popularity among academic historians who prefer it as it was written straight after the battle. They pooh-pooh the traditional account.

However the scene from the tapestry hints at a chain of events that explains all. The words "Harold Rex" are placed over the man wounded in the head by an arrow. The words "is killed" are over the figure of an Englishman being hacked down by a Norman knight on horseback. Perhaps the scene is intended [as some others clearly are] to be read chronologically. That would mean that Harold was first wounded by an arrow in the eye, and then killed by one or more Norman knights.

This solution neatly explains all the evidence - the accounts of Guy,William ad Amatus are all true, and the otherwise enigmaic tapestry panel is explained. It is also in accordance with human nature. The knights who killed Harold would naturally want to boast about having overcome one of the most famous warriors and military commanders of his age. They would not be so keen to boast of having killed a man already grievously wonded by an arrow in the eye.

I have a wide range of talks available to be given over Zoom or - when permitted - in person. See my website for details.

Posted by Rupert Matthews at 09:35