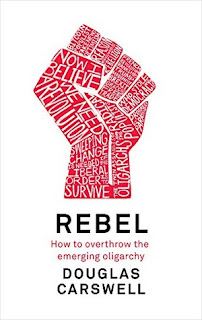 Douglas Carswell has an axe to grind - which makes this book far more enjoyable and interesting than most of the political books that I plough my way through. I flew through the well-written pages ennjoying every single insult, gibe and sarcastic thrust that Carswell hurled at those he blames for the miseries of mankind.

Carswell's main point - admirably made with numerous historical exampales - is that the people in power have a tendency to feather their own nests not only at the expense of others, but even if that means ultimately reducing the amount of prosperity in the society they rule and thus making themselves poorer. That tendency can be halted, but only if power is diffused through society so that the elites do not have the power to rush headlong into economic suicide.

He then shows how there are chilling indications that our Western society is starting on the road to disaster.

Well-written, well-argued, well-thought out. Doesn't mean he's correct of course, but make your own mind up.
Posted by Rupert Matthews at 07:56