A Penny of King Edward III


A penny of Edward III. These coins were minted in vast quantities at a number of mints around the country. They were the basic unit of English currency at the time of Crecy with men’s pay being calculated and paid in pennies.


from "The Battle of Crecy" by Rupert Matthews. 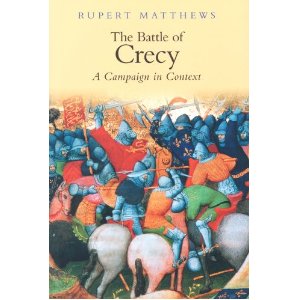 Publication Date: 1 May 2007
Rupert Matthews tells the story of the most dramatic military campaign of the medieval world, a thrilling tale of action, adventure, mystery and much more. Before the Crecy campaign began, France was recognised to have the greatest, most powerful and most modern army in all Christendom. England was thought of as a prosperous but relatively backward kingdom lying somewhere in the sea off the European coast. But six hours of bloodshed, slaughter and heroism beyond imagining changed all that. The pride of France was humbled, her army destroyed and her king a wounded fugitive fleeing for his life through a foggy night. This book explains to the general reader the reality of warfare in the year 1346. It seeks to recreate in our minds the tactics used in the Crecy Campaign and to put them into the context of the time. It shows what the weapons were like and how they were used in action. It describes the tactics of the different military units involved and how these would have impacted on each other in battle. Crucially, it takes the reader inside the minds of the commanders to explain what they did, why they did it and what they hoped to achieve. This is the second in Spellmount's new series, "Campaign in Context".
Posted by Rupert Matthews at 00:53 No comments: