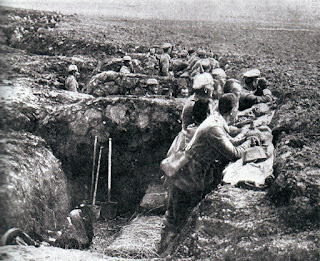 After being defeated on the Marne, German commander in chief Helmuth von Moltke ordered his armies to retreat to the River Aisne.

When they reached the Aisne, the Germans took up position on the hills north of the river. From there they could shoot accurately at any troops trying to cross the river.

British and French pilots flying to scout the German positions found they were often being shot at by soldiers of their own armies. They began painting red, white and blue stripes on the wings of their aircraft so that they could be recognised.

A few weeks later the High Command ordered the pilots to paint standard markings on their aircraft. British planes had a red circle inside a white circle inside a blue circle. French aircraft sported the same circles in reverse.

The German pilots, meanwhile, began painting a black cross on their aircraft.

On 13 September the British together with the French 5th and 6th Armies crossed the Aisne on pontoon bridges under heavy fire and attacked the Germans. They broke the German lines and moved forward.

The following day the British and French found themselves faced by German troops in trenches and machine gun nests. Unable to advance against heavy fire, nor to inflict casualties on the Germans, the allies halted and dug their own trenches.

Joffre ordered a new attack on 18 September, but his men failed to make any advance and suffered heavy casualties. Joffre called off the attack and ordered his artillery to begin shelling the German trenches.

The Battle of the Aisne marked the beginning of trench warfare on the Western Front.

Kaiser Wilhelm II of Germany sacked von Moltke as commander in chief and replaced him with Erich von Falkenhayn.

Posted by Rupert Matthews at 04:05 No comments: 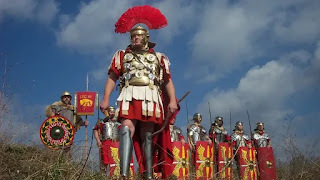 After the murder of the Emperor Commodus in 193, the Senate voted to make the famously well-educated retired soldier Publius Helvius Pertinax the new emperor. Pertinax agreed and was installed in power.

When Pertinax tried to reduce the excessive wages and bonuses paid to the army, he was murdered by the Praetorian Guard. The Praetorians then appointed Marcus Didius Julianus to be emperor.

Julianus lavished gifts on the Praetorians, which alienated the fighting legions stationed on the frontiers. The 16 legions of the Rhine-Danube frontier appointed the general Lucius Septimius Severus to be emperor.

Septimius Severus marched an army to Rome. As the troops approached, the Senate declared that Julianus was deposed and that Severus was the new emperor. They sent a small group of men to kill Julianus.

Although the official start of the rule of Septimius Severus came with the vote in the Senate that gave him the powers and wealth of an emperor, it was clear that the Senate had passed the motion only because of the approaching army.

The commander Maximinus Thrax was proclaimed emperor by the army in 235, but he waited until the Senate had passed a motion acclaiming him before assuming the title. However, when a group of senators objected, Maximinius had them executed without trial.

In 238 the Senate once again tried to assert itself. The Senate appointed two highly respected senators, Decius Balbinus and Marcus Pupienus, to be joint emperors. But these men lacked support outside the Senate and were murdered by the Praetorians.

The army rallied around Gordian III, who came to Rome to accept a vote of the Senate that made him emperor. After this, the Senate never again tried to appoint an emperor. They always waited to see who the army supported first.

The army rarely supported an emperor for long. If a ruler did not win military victories quickly, or failed to give the soldiers a share of the wealth of the emperor, he was quickly murdered and a new commander appointed in his place.

Even the successful emperors such as Diocletian (see page 38) and Constantine (see page 40) managed to stay in power only because they kept the soldiers content.
Posted by Rupert Matthews at 04:02 No comments:

A musketeer from the time of the Civil War. His main weapon is a matchlock musket. This gun fired a lead bullet weighing about half an ounce. Due to the loose fit of the ball in the barrel the weapon was accurate to only around 80 yards, though the ball could kill a man at anything up to 150 yards. The forked prop in his right hand is a support to take the weight of the weapon  when it was fired, these supports were going out of fashion at this date as the guns became lighter. Dangling from his cross belt are a number of pre-packed cartridges containing gunpowder and musket ball. Further ammunition would be kept in a box or chest nearby to be shared out to the men as needed. Rates of fire were slow, around one shot per minute. He therefore has a sword as a secondary weapon to use in hand to hand fighting.
Posted by Rupert Matthews at 03:59 No comments: 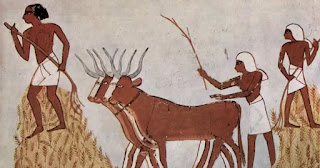 Every year the river Nile flooded. The flood waters spread fertile silt over the fields and deluged them with water. The water was trapped behind dams and in deep pits so that it could be used to water the crops in the dry months that followed. If the floods were not high enough the crops might not grow properly. Nilometers were gauges that measured how much the river rose at flood time.

Each farmer and landowner had their own fields to farm, but canals that carried water from the Nile were shared between various people. There were many disputes between farmers about how much water they could use and who was responsible for keeping the canals in good condition.

Water was lifted out of the canal to be poured on to fields by means of the shaduf. This is still used in Egypt today. It consists of a bucket attached to a long pole which has a heavy weight at one end. The farmer fills the bucket with water. Then he swivels the pole around, balancing the weight of the water with the counterweight.  Egyptian Crops

The most important crops grown in ancient Egypt were grain such as wheat and barley. Other crops included grapes, onions, garlic, cucumbers, leeks, cabbages and melons. Cattle, sheep and pigs were also kept for meat or milk.

The Egyptians enjoyed eating meat from wild animals. Birds were hunted by throwing sticks or stones at them, while men with spears hunted hippopotamus in the Nile. Antelopes, gazelles and hares were hunted in the desert areas.

Egyptian houses were built out of bricks made by drying mud in the sun. They had flat roofs and small windows. Most families had only a room or two in their house, but noblemen had much larger houses with a small shrine attached and storerooms for keeping food and drink.

What did a nilometer measure?

You could design an Egyptian menu for your family dinner.

A sheet of paper

Find out what you are going to have for dinner. Now write out the list of foods and decorate it with pictures drawn in the Egyptian style, as seen in this book.

Posted by Rupert Matthews at 03:57 No comments: 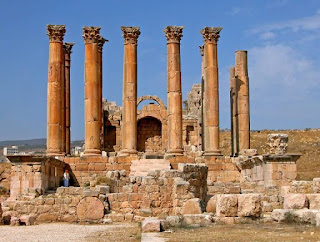 Most Greek stone buildings were constructed using stone dug out of local quarries, but some were faced with more expensive stone such as marble that was hardwearing and looked better.

Stones were cut roughly to the right size and shape at the quarry. They were then moved by boat or by cart to the building site.

Once at the building site, each stone would be carefully carved using bronze or iron tools to precisely the correct shape before being lifted into place.

Stone blocks had small holes in the top where metal hooks could be fitted. The hooks were linked to ropes that ran through pulleys. Teams of slaves hauled on the ropes to lift the stones.

The stone blocks were held in place by bronze hooks and strips, known as cramps. These could be hidden inside the stone so that they could not be seen once the building was finished.

Columns were built up out of a number of circular sections called drums. Each drum had a hole at its centre through which a wooden pole was pushed. Each drum was put into position by being lowered over the top of the pole.

Columns were often built with a bulge at the middle. When seen from a distance a straight column can look thinner at the middle, so making it bulge actually made it look straight.

The statues and sculptures that adorned Greek buildings were carved in a workshop on the building site. Once finished they were lifted into position.

When the main building work was completed, painters went to work. Most of the sculptures and other decorative features were painted in bright shades of red, blue and may even have been gilded.

Architects liked to keep their methods of building a secret so that they alone knew how to build. When he was asked how he had erected the gigantic gate of the Temple of Artemis (see page 152) the architect Chersiphron said “Artemis did it”.

Posted by Rupert Matthews at 03:53 No comments: