The Hampshire Regiment at the Battle of the Taku Forts 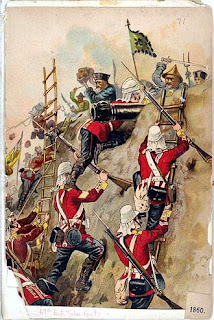 The Tuku Forts guarded the entrance to the Peiho River on which stands the Chinese capital of Beijing, then called Pekin or Peking. The forts had been first built in 1522, but over the years had been expanded and strengthened until by 1860 the fortified complex comprised five large forts, each able to operate independently, and 20 smaller fortifications. The forts are sometimes called the Taku Forts or the Tanggu Forts depending on which transliteration system is used to turn Chinese writing into the western alphabet.

In 1859 a naval flotilla tried to force a way past the forts, but failed. It was decided instead to land an army to capture the forts and so clear a way for the ships to sail upriver to Pekin. The 67th Regiment (later the South Hampshire Regiment) was then stationed in India, so it was shipped to China to take part in the expedition.

On 30 July 1860 the Anglo-French army led by Sir James Hope Grant landed at Pei Tang Ho. Hope had about 12,000 British and 8,000 French soldiers with him. Hope secured the area before a column set out towards the Taku Forts. As the column approached the fortified village of Sin Ho a large force of Tatar cavalry appeared and prepared to launch an attack. The 67th formed a skirmish line and drove the horsemen off with rifle fire. Sin Ho was then captured and the British began digging trenches and building gun emplacements around the three forts on the north bank of the Peiho.

At dawn on 21 August Hope studied the walls of the first fort and decided to order an assault to be carried out by the 67th. The walls of the fort were about 20 feet tall and in front of them was a wide moat and an extensive area of ground in front of that had been flooded to be marshy and was liberally planted with sharpened bamboo stakes. The fort mounted 15 cannon and was manned by over 1,000 men.

The 67th advanced at 7am, wading through the marsh to reach the edge of the moat. A squad of picked men was sent to swim the moat, then scramble up the walls to cut the ropes holding the drawbridge so that it would come down and enable the rest of the regiment to storm across. As the men swam over, those on the bank kept up a steady rifle fire to dissuade the Chinese from firing with their muskets from the fort’s embrasures. Six men made it and the drawbridge came down.

Lieutenant Nathaniel Burslam led the charge over the bridge, receiving a musket ball in his chest as he did so. Burslam and Private Thomas Lane got to a small hole in the walls made by the cannon and they began widening the hole with their sword and bayonet. Meanwhile Lieutenant Edmund Lenon, and Ensign John Chaplin, who carried the Regimental Colour, were scrambling their way up into an embrasure through which fired a Chinese cannon. The Chinese defenders rained missiles down on the men, Lane being hit on the head by an artillery shell which fortunately did not detonate — his new style helmet probably saved his life.

First through was Chaplin who held off a Chinese counterattack with his rifle while Lenon squeezed through after him carrying the flag. Chaplin was wounded three times by musket balls, but carried on firing. Meanwhile, Lane and Burslam had enlarged their hole so that several men could get through at once and Burslam led a dozen men in to link up with Lenon and Chaplin. Together the men got up on to the parapet of the wall and began fighting their way towards the nearest cannon. More and more men of the 67th were now entering the fort, spreading out  to capture the buildings from the retreating Chinese. The wounded Chaplin reached the pole on which was flying the Chinese flag, cut it down and replaced it with the colours of the 67th, at which point he was wounded for a fourth time. The Chinese then abandoned the fort and fled. The other two forts surrendered as soon as the British formed up to attack them.

Amazingly Ensign Chaplin made a full recovery from his four wounds. Along with Lane, Burslam and Lenon he was awarded the Victoria Cross for his actions in the assault. The regiment was given the Battle Honour Tuku Forts.

Posted by Rupert Matthews at 06:22