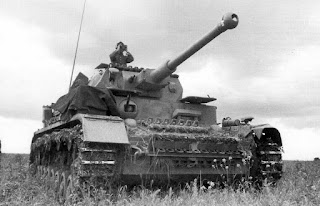 In the spring of 1940 the German army overran country after country as Hitler pursued his ambition of making Germany the most powerful state in Europe.

The seemingly unstoppable German advances began on 9th April when a combined air, sea and land assault overran Denmark in a single morning. Norway was next, with German forces landing at Bergen, Trondheim, Kristiansand and Narvik. A British fleet, which had been off the Norwegian coast to lay mines, attacked the German invasion fleets, but was heavily outnumbered. The Norwegians held out in the mountains for almost a month, the final units surrendering on the 5th May.

It soon became clear that the invasions of Denmark and Norway had been merely sideshows, designed to secure the German flank. On 10th May the main German attack began as they invaded Holland, Belgium, Luxembourg and France. The largest French army was in the south, defending the Franco-German border, though many units joined the British in advancing into Belgium to attempt to hold the line of the Dyle River.

But the Germans were using their new Blitzkrieg tactics. Large columns of tanks, armoured vehicles and motorised infantry supported by heavy artillery and bombing from aircraft thrust deep behind the British and French lines. While the British were holding firm in Belgium, they were being outflanked to the south. On the 17th Lord Gort, the British Commander, decided to start planning his retreat. First he tried a counter-attack with his tanks, but although the British achieved a limited local advance, it did nothing to stop the surging German advance towards the sea.

On the 20th May the Germans reached the sea at Abbeville. The British army and many French units were isolated from the main French army to the south. Lord Gort turned to the navy to evacuate his men. The navy responded with Operation Dynamo, a hastily put together plan which involved getting the army on to ships in Dunkirk Harbour while a rearguard held off the advancing Germans.

On the evening of the 26th the first troops began to be loaded on to ships. It soon became clear the navy could not get the men off in time, so an appeal went out for small boats - such as trawlers, fishing boats, yachts and pleasure boats - which could get close enough to the beach to pick up soldiers direct from the land.

On the 28th the Belgians surrendered, opening a weak flank in the British position around Dunkirk. Having halted for a few days to regroup, the Germans attacked again, plunging Dunkirk into a storm of bombs and artillery fire. Several of the ships and boats trying to rescue the army were sunk, others badly damaged. The harbour facilities were almost totally destroyed and by the 1st June only a single pier remained open for use.

The evacuation carried on as German bombers pounded the beaches and ships and as the German troops moved ever closer. Finally at 2.40am on 4th June the destroyer HMS Malcolm pulled out of Dunkirk. The rescued Scottish troops on board played their bagpipes as the ship cruised slowly along the beaches of Dunkirk. Nobody was to be seen on the beaches. The only troops left were the dead, badly wounded and the heroic rearguard still holding off the Germans. The Malcolm turned away and headed for Dover.

In all some 338,000 men were rescued from Dunkirk. Although the British army had been forced to leave behind its tanks and guns, it came home more or less intact. The way in which ordinary civilians had sailed into the storm of gunfire in their little yachts to rescue the army and th the warm welcome given the troops when they arrived exhausted back home gave rise to what was called the Dunkirk Spirit, a feeling that everyone in Britain had to pull together to fight and win the war.

In France, meanwhile, the German army swung south after taking Dunkirk. On the 10th June the Germans broke through th the new French line and on the 14th the French government fled from Paris. Three days later the French asked Germany for terms of surrender. The few British, Polish and Czechs troops left in France at once rushed to sea ports to get away before the final surrender. On 22nd June, France surrendered. Britain was alone.

The History Man offers a range of services to publishers, film-makers and television producers as well as being a public speaker for lunches, dinners and other events. Find out more on: https://rupertmatthews.com/