Newbury West Fields, before the Railway 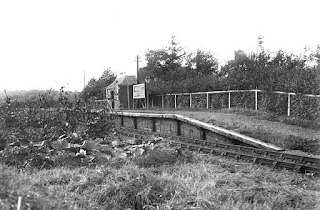 The now-vanished station of West Fields Halt in Berkshire stood, as its name suggests, on what were once open fields to the west of Newbury. The area is flat and low-lying, so the fields were mostly meadows beside the River Kennet that flooded in particularly wet winters.
Livestock grazed here in the summer and river water flooded it in the winter. Newbury itself, however, was booming. The growth of Bath as a health resort for the gentry made Newbury an overnight stop on the coaching route from London to Bath. The number of inns in the town grew rapidly, which each new hostelry seeking to outdo the others in luxury and comfort. These provided hundreds of jobs, causing the population of the town to increase. At any one time there would be over a thousand horses in Newbury, and they all needed feeding. The West Fields were given over to grazing and haymaking.


When the Great Western Railway built its first main line from London to Bristol it went to the north, bypassing Newbury. The coaching trade collapsed as people preferred to travel by rail and the prosperity of Newbury vanished almost overnight. The railway eventually came to Newbury in 1847 when the Berkshire and Hampshire Railway built its lines linking Reading, Hungerford and Basingstoke. The line was later taken over by the Great Western Railway.


The line from Newbury to Hungerford ran straight across the West Fields, slicing them in two. The building of the line necessitated the draining of much of West Fields so that they no longer flooded in winter, and the land went over to agricultural use. In later Victorian and Edwardian times the town began to spread, though this was mostly north of the river. As yet the built up area was not expanding  much into West Fields.
Posted by Rupert Matthews at 09:51