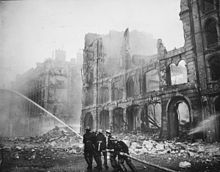 Anyway to get back to Leonard [my father] in London. Getting people to stay at the office all night fire watching was not easy. Offices were uncomfortable and did not have cooking facilities and anyway people wanted to get home and fire watch there — especially when that pretty Mrs. Jones was on duty.
So quite often offices were not fire watched and did indeed burn down when they might have been saved. So Leonard and another journalist in the air force with him, George Allen, fell to calling round at the office in Farringdon Street where Leonard had worked before the war and where he hoped to carry on with his promising career after the war. They asked if anyone was fire watching that night and if there was no one or only one person, Leonard and George used to go round when they came off duty at the Air Ministry and fire watch at the Amalgamated Press — as this place was called.
Well in wartime you all have to do your bit, don’t you. And Leonard wanted to make sure he had a job to go back to.
One night when they were there, there was an incendiary raid on that part of London and quite a scattering of incendiary bombs fell on the roof of their office block. Now Leonard and George would start talking about this and staff members who remembered the war would talk about it with gusto. But George and Leonard would glance round and suddenly become rather reticent and say something about it had all happened in rather a rush and they could not really remember the details.
However it would seem that the two of them and the staff member managed to put out quite a few of the bombs, but then the sand ran out. (Supplies of sand and shovels were kept on rooftops of well managed companies — some did not bother and just hoped for the best.) Anyway Leonard and George ran out of sand, but several bombs were still sizzling away, so they grabbed the long handled shovels and tossed the bombs off the roof, over the side of the wall. Marvellous! Their building did not burn down and after the war Leonard went back to work there. Unfortunately the bombs fell on the building next door where no one was fire watching, no one put the bombs out and that building was gutted by the flames. Next morning the employees of the Amalgamated Press arrived and carried on with their jobs. The employees of the building next door were out of work. — Well they should have been fire watching shouldn’t they! War is merciless.
Of course after a while Leonard and George started denying this story — in case they were blamed for burning down the building next door — but we all believed that this is what really happened.
Posted by Rupert Matthews at 08:42