The King of Britain was also the King of Hanover at this date. In 1803 Hanover was conquered by France and its army disbanded. The British government appealed to the Hanoverian soldiers to come to Britain to join a new armed force to continue the struggle against France, and several thousands did so. The result was the King's German Legion, which eventually came to include two regiments of heavy cavalry, three of light cavalry and eight of infantry, plus six batteries of cannon.
The King's German Legion (KGL) was reckoned to be every bit as professional and effective as the regular British army, with many people believing its cavalry were better than the British. Units of the KGL were present in the Peninsular War from the start of British involvement at Vimiero through to the Battle of Toulouse. Their uniforms and equipment, which were all supplied by Britain, generally followed British styles with a few minor distinguishing features. 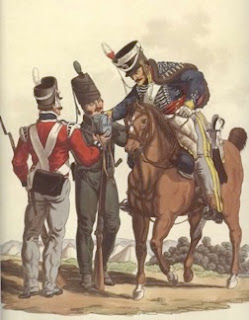 Posted by Rupert Matthews at 05:23