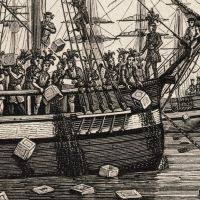 The British colonies in North America had grown up around commercial and religious colonies and had become accustomed to running their own affairs. When the British government attempted to impose stricter control from home it lead to trouble.


Over the years since they were founded, the British colonies of North America prospered and grew out of all expectation. Rivalry with France had been ended in 1756 when General Wolfe captured Quebec and conquered the French colonies. However, the increasingly large and prosperous colonies were proving expensive to protect and police.

In order to recoup the costs of running these territories, the British government imposed a number of taxes on the American colonies. Because most of these were imposed on trade, they directly affected the wealth of the residents and were deeply resented. After a number of protests and a few outbreaks of violence, the British lifted the new taxes.

However, one much hated measure remained. The East India Company was given a monopoly over trade in tea and the government took a cut of three pennies a pound. The American colonists were angry that they could not buy tea from whom they wished, and doubly annoyed that this was to enforce a tax  paid to London. Newspapers and politicians called for a boycott of tea which, although not terribly effective, did raise the issue.

On 16th December 1773 a group of young colonists in Boston dressed themselves as Mohawk Indians and stormed aboard the ships of the East India Company that were in harbour. The ‘Sons of Liberty’ as they called themselves, pushed aside the protesting sailors, smashed open 342 chests of tea and dumped the contents in the harbour.

When news of the raid reached London, the Prime Minister, Lord North, ordered that the entire port of Boston be closed to all ships. He then went on to revoke the power of Massachusetts to rule itself and imposed a governor from London. Not content with that, the British government also required government officials accused of serious crimes to be sent to London for trial, instead of trusting them to local juries, and gave the new governor the right to station his troops wherever he liked, even in people’s houses. The colonists dubbed these Acts of Parliament the ‘Intolerable Acts’ and were determined to overthrow them.

Posted by Rupert Matthews at 06:18