The Legend of the Female Pope 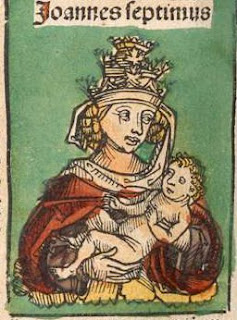 The legend of the female pope comes in many forms and details vary considerably. However, as the tale is usually recounted it goes something like this.

Soon after the year 800 a girl named Joan was born into the Anglicus family of minor nobility at Mainz, Germany. Her parents being somewhat indulgent, the girl was allowed to study books as well as the more customary skills needed to run a household and bring up a family. She showed such talent for learning that she was permitted to acquire a small library and to attend lectures in theology and philosophy at the school attached to Mainz Cathedral. Fearing a minor scandal, and wary of their daughter's safety wandering about alone, Joan's family insisted that she dress as a boy and call herself "John".

As "John Anglicus" progressed through his teenage years her precocious talents were noticed and remarked upon. At some point "John's" parents died and she was free to continue her academic career in the guise of a man. In the 9th century such a career was generally open only to a monk or member of the clergy. Living cost money, and books were formidably expensive before the invention of printing lowered the cost massively. Only a rich person, or one supported by the Church, could hope to avoid the need to work for a living. "John" therefore entered the Church in order to continue with the academic work she loved so much.

"John" then moved to study in Athens, then a part of the Byzantine empire. everyone in Greece accepted "John" as a scholar from Germany. There was, however, one man who knew the truth. either in Athens or just before she left Germany, "John" met and fell in love with a fellow scholar. She revealed her true sex to the man and the two became discrete lovers.

Having learned all she could from the Byzantines, "John" moved to Rome where the greatest libraries of western Christendom were to be found. Her growing reputation as a scholar led to "John" being in demand as a lecturer and preacher. Her talks became famous for their erudition and humanity, attracting large and distinguished audiences.

When the reigning pope died, the clergy and people of Rome gathered to elect a successor. They unanimously chose "John Anglicus" to be the Bishop of Rome, and so the next pope. "Pope John" moved into the Lateran Palace and took up the reins of power. At first all went well, but after a short reign as pope, "John" fell pregnant. This rather inconvenient fact was covered up successfully as the pope pretended to be ill, but eventually "John" was forced to attend a service in St Peter's Basilica. As "Pope John" was riding in procession from the Lateran to St Peter's she passed down Via di San Giovanni.

Suddenly the Pope collapsed off her horse in pain. She suffered a late miscarriage, losing blood heavily and contracted an infection from the dirty street. Fever set in and within days she was dead. She had been pope for two years, seven months and four days.

The Catholic Church was horrified by the scandal. Those who had seen the pope collapse were bribed or intimidated into silence. The reign of Pope John was consigned to the past and the Church moved on to a new era under a new pope. A small statue of an anonymous woman was erected in the Via di San Giovanni, then it was neglected. The fact that a woman had once sat on the throne of St Peter was forgotten.

But, of course, such an important secret could not be kept hidden for ever. People who had been sworn to secrecy told their children about the day that they had seen a pope give birth. The official records may have been purged, but enough of the truth remained for later historians to notice discrepancies. For instance Pope John's immediate successors, who were in on the secret, never went down the Via di San Giovanni. And once that tradition was established later popes avoided the street, though they did not know why. The truth lived on in legends, rumours and misremembered facts.

Posted by Rupert Matthews at 09:06