The German Breakthrough in France, 1940 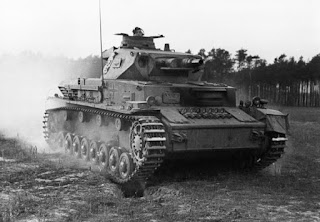 On the evening of 9 May Hitler and his entourage boarded a train outside Berlin. The staff were told they were going to visit the troops on a morale-boosting mission which would be filmed to be shown in the cinemas. Not until they arrived at Euskirchen did Hitler reveal what was really afoot. He had little choice because as they got out of the train a vast formation of Luftwaffe bombers thundered overhead, flying west.

In Britain the attack prompted a change of government. Chamberlain resigned and was replaced by Churchill. This event had little immediate impact on the fighting, but that would soon change.

Hitler, meanwhile, was receiving the reports from his commanders. He was most thrilled when he heard that the Eben Emael attack had succeeded - Hitler literally hugged himself. The parachute forces held on for 24 hours, until the two panzer divisions earmarked to invade Belgium arrived, crossed the intact bridges and motored west. Further north the parachute troops had also captured the bridges in Holland and had secured a position in the heart of The Hague, paralysing the Dutch government. These successes were vital to the plan. They convinced the French and British that the main German attack was coming in Belgium and caused them to march the bulk of their forces northwest to meet the threat.

Hitler’s eyes now turned south to where the massed panzer divisions were moving through the Ardennes. The main thrust was being made by Guderian’s XIX Panzer Corps with Reinhardt’s XLI Panzer Corps on his right flank, both formations were under the command of von Kleist. To the north was the XV Panzer Corps under Hoth who, like Kleist, was responsible to Rundstedt who commanded the entire Army Group A.

Guderian reached the Meuse at Sedan on 12 May. As expected the bridges had been blown by the French, but the far bank was less defended than the Germans had feared. This was because the French had estimated it would take German infantry, marching and fighting on foot, at least nine days to reach the Meuse. French forces were, therefore, not by then in position. Guderian had identified a loop in the river near St Menges as being ideal for a forced crossing. The wooded hills on the German bank were ideal cover for massing his forces and allowed his artillery to dominate the far bank.

To make certain of success, Guderian called down a vast cloud of Stukas which pummelled the far bank on the afternoon of 13 May. As soon as the Stukas had delivered their loads, at about 4pm, Guderian sent his infantry across in rubber boats. By dusk a secure foothold on the far bank had been secured and by midnight the engineers had built a bridge across which poured the panzers. By the afternoon of 14 May Guderian’s entire corps was over the river and had crushed the French forces opposing them. There was nothing between Guderian and the English Channel except open space.

The next day Guderian linked up with Reinhardt and then with Hoth. There was now a massive armoured spearhead of seven panzer divisions thundering west with some 40 divisions of infantry following as fast as they could march. By dusk on 16 May the panzers were approaching the headwaters of the Somme.

The French Prime Minister, Paul Reynaud, was one of the few Frenchmen to appreciate fully the possibilities of tank warfare. When he heard that so many German tanks were over the Meuse he phoned Churchill. “We have lost the battle”, was Reynaud’s grim message. Having put down the phone to London, Reynaud picked it up again and sacked the French commander, the elderly Maurice Gamelin, replacing him with the more aggressive Maxime Weygand. The move was understandable, but Weygand was in Syria and it took him three days to reach his new command. They were to be three days of hesitation and confusion in the French high command.

Posted by Rupert Matthews at 09:00