Sources for Alexander the Great 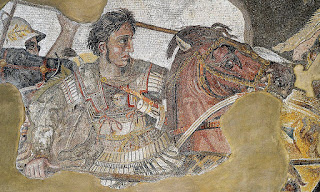 The real problem when it comes to writing about Alexander is that none of these contemporary books has survived to the present day. All these books were lost when the Roman Empire collapsed. Instead we have to rely on the works of men who lived later, but who quoted from the contemporary sources or relied on them.

Of these later sources the most important are Arrian, Plutarch and Diodorus. Arrian was an admirer of Alexander who drew mostly on the books by Ptolemy and Aristobulous. He also had other sources, some of which were probably official government records. Arrian’s Life of Alexander is long and detailed. Arrian was a Greek who rose to be governor of Cappadocia in the Roman Empire. He wrote his book about the year ad110. Plutarch was another admirer of Alexander. He wrote a shorter biography, but he put more effort into looking behind events to assess character and intentions. He based the outline of events on the work of Ptolemy, but also quoted from a host of other sources that are now lost. Many of the human interest anecdotes known about Alexander come from Plutarch’s work. Writing about the year 50bc, Diodorus Siculus is the oldest surviving source on Alexander. Diodorus actually wrote a 40 volume History of the World, of which the exploits of Alexander form only a part of one volume. Diodorus preserves much of the work of Cleitarchus, and so is the main source for any stories that do not portray Alexander in a favourable light. All these sources share a common problem when read today. They assume that their readers will know things that, today, we don’t. They did not need to set down detail on the weapons of the time, for their readers would have seen them for themselves. They did not need to explain how troops formed up for battle, as their readers would already have known. Imagine a modern writer producing an account of the invasion of Iraq by the USA and its allies. He would not need to explain what a tank was, nor an aircraft. He would not need to explain that Saddam Hussein ruled Iraq, nor that George W. Bush was President of the USA. All this he could assume his readers would already know. He could just get on with telling the story of what happened. But for a reader in the 40th century, unfamiliar with the situation, all this and much more would need to be explained for events to make sense. For details of how battles were fought we need to look elsewhere than the biographies of Alexander. There are two main sources for Macedonian warfare. The first is Polybius, a Greek writer born in 204bc who later moved to Rome and wrote a “History of Rome”. Polybius also wrote a detailed work on military history, but this has not survived. Other writers quoted extensively from Polybius, and some of these books have survived. By picking and choosing excerpts from a dozen later books it is possible to reconstruct much of what Polybius had to say. The second main source for military matters is Asclepiodotus, who was writing about a century after Polybius. His works have survived and include some very detailed information on weapons and tactics. Unfortunately for us, Asclepiodotus is writing about how the Macedonian system worked some 200 years after Alexander’s time. By that time terminology and practice had both changed and it is not always easy to decide which bits of what Asclepiodotus tells us are relevant to Alexander’s time.
Posted by Rupert Matthews at 09:03