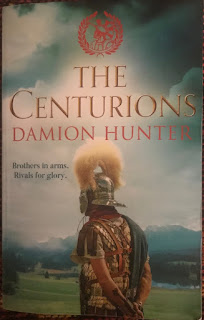 A great book. This is a cracking adventure novel set in Ancient Rome and on the German frontier. There are battles, political intrigue, personal feuds, love interest and enigmas aplenty. If you like a good adventure, this is for you.

At first I worried that the central plot line would come across as artificial and silly. A pair of half-brothers - one a wealthy nobleman and the other the bastard sone of a slave woman - had the potential to be schmaltzy. In the event, the author carried it off very well. The way in which the kinship came about, the way the brother grew up and the method the father found to seek reconciliation were all perfectly credible and believable.

The secondary characters were all well drawn. The German leader is a great character with loads of potential, much of which was fulfilled in this book. The German slave woman was particularly credible with all her hang-ups and character flaws. Even the nomadic trader who was in the book for only a couple of chapters was well drawn with a good back story. In fact, I can't think of a single character who was not utterly credible and well drawn.

The story line was pretty good too. I won't give anything away, but there are twists and turns right up until the final page. And while this story is complete in itself, it sets things up nicely for the next book in the trilogy without leaving so many loose ends that it becomes annoying.

Posted by Rupert Matthews at 09:02