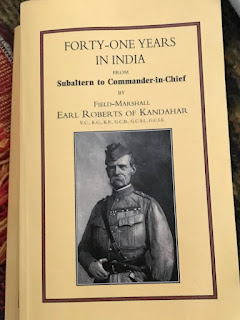 Fantastic!
This is the autobiography of "Bobs", as he was known, Frederick Roberts, the 1st Earl Roberts of Kandahar. I'd known of Bobs from other military books, but did not really know a huge amount about his life and career.
The book was written in the 1890s and clearly draws on diaries or letters written at the time. Nobody could have a good enough memory to produce this wealth of detail without such sources. The author seems also to have had access to government archives as he sometimtes quotes proclamations, letters and other official documents.
As with any book written so long ago, the author assumes that the reader knows all about things that were common knowledge in his day, but not now. So you will need to know the difference between a nabob and a nawab, a maharatta and a maharajah. Also, a map of India would come in very handy indeed. Plus a short guide to Prime Ministers and other leadering politicians of the 2nd half of the 19th century would come in useful. Plus, of course, he shares the views and opinions of men of his time - which may seem rather out of date today.
That said, this is a fascinating book. For a start it is a gripping tale of high drama, military escapades and political intrigues. Event follows event, drama follows drama with breathtaking speed. He skips often long periods of time with some quite short sentences along the lines of "I spent the next three years in garrison duty, but then was sent to command..." Great. No let up in the frenetic pace of action.
He arrived in India just before the Indian Mutiny, so a lot of the first part of the book is all about that upheaval. He covers a lot of ground that is familiar to historians - the chapattis, Mangal Pandey, Meeerut, Cawnpore etc - but most of it is composed of his personal adventures and his own observations on the causes and course of the great rebellion. All very interesting.
The book is filled with a huge variety of anecdotes and human-interest stories - albeit of a robustly male kind. The old man carrying a sword who Bobs saw by the side of the road as he was leading a column up to Afghanistan. He turned out to be a retired soldier who wanted to rejoin now his regiment was marching to war. How a mountain gun could be taken apart and carried on mules. The touchiness of officials from the independent states over official gifts, and the difficult matters of precedence about who sits where at a dinner.
The book is a real treasure trove of information about India in the later 19th century. Religion, food, social castes, industry, agriculture are all here, so are social mores and customs.
He also gives a lot of insights into how India has changed from when he was first there [the 1850s and 1860s] compared to "today" [the 1890s]. This usually revolves around transport and medicine.
If you see this book, grab it with both hands.

Posted by Rupert Matthews at 07:09