The most famous raid of the Second World War and the subject of perhaps the greatest war movie ever made - the Dambusters.
This great raid of 1943 marked the pinnacle of precision bombing by the RAF during the war. The dropping of the bombs called for enormous skill and expertise by the aircrew on the raid, while getting to these targets deep inside Germany and back again required courage of the very highest order. The technical problems to be overcome were no less tricky. Dams are enormously strong structures, but tiny when seen from the air. How to place a bomb in the right place had defeated the finest brains of the world - until Barnes Wallis came along with his revolutionary idea for a bouncing bomb.
This is the story of the raid and of the meticulous planning that preceded it. Seen the film? Now read the true story.


About the Author
Leonard James is an author of military books. He comes from a military family that has fought in every major war since at least the Crimean War, and probably before that. His forebears were mostly cavalrymen, though his father served in RAF Bombver Command during World War II. 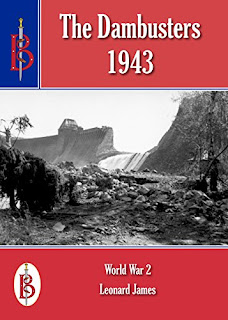 Posted by Rupert Matthews at 00:32