Gogmagog: An Enigma in 4 Parts

Few figures in Celtic mythology and legend have become as controversial, muddled and problematic as Gogmagog. Academic careers have been ruined, hillsides excavated and artistic careers enhanced by this enigmatic giant.

If you read the standard reference works you will be assured that there is absolutely no truth in this story, that Gogmagog was an imaginative creation of a medieval charlatan and that the whole business is best forgotten. While it is true that much of the original material relating to Gogmagon is questionable, or at least of doubtful provenance, this does not mean that the figure can be dismissed out of hand.

In this book, historian Roddy O'Farrell sets out to show that Gogmagog has every bit as much claim to be taken seriously as a figure of genuine British folklore as better known characters such as Tuathal, Lancelot (see my book in this same series) or Robin Hood. The brutal, violant giant Gogmagog was, he shows, a genuine folkloric figure of Celtic legend who may, bizarrely, have had some sort of basis in fact.

By the ebook HERE 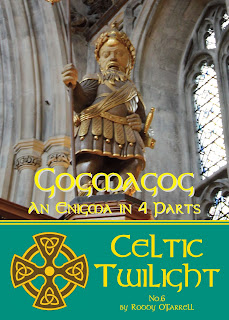 Posted by Rupert Matthews at 00:18