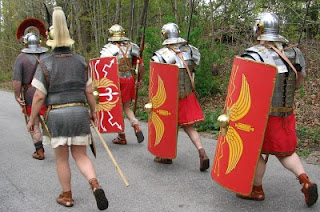 Heavily armoured infantry formed the legions. The main fighting formation of the Roman army was the legion, a force of about 6,000 men. Most of these men were equipped with body armour, a helmet and a large rectangular shield, as well as a sword and throwing spear.

Roman allies wore cheaper armour. Every Roman army included soldiers called auxiliaries who were from countries that were allied to Rome. These units had to provide their own armour and often wore tunics covered with mail or with scale armour, which was made up of lots of small metal plates.

Roman armour was made up of strips of metal. During the period when the Roman Empire was at its largest the legionnaries wore armour known as lorica segmentata. This was made up of a series o of metal strips bent to fit the human body and held together by leather straps and metal buckles.

Roman shields could be used to form a “tortoise”. One tactic used by the Romans was called the testudo, or “tortoise”. The men formed a dense group then held their shields so that they interlocked on all sides and overhead, just like the shell of a tortoise. They could then attack an enemy safe from spears or arrows.

Roman swords were copied from the Spanish. After about 200bc Roman soldiers carried a sword that had a straight, broad blade with a sharp point. The weapon was used to stab an enemy rather than slash at him. It was copied from a style of sword used by Spanish soldiers who defeated the Romans in battle.


Make a Legionary Door Sign
You will need:
Piece of card 15 x 7 cm
Scissors
Crayons
1. Cut the top of the piece of card to the shape shown.
2. Draw a legionary looking out from behind his shield on the card.
3. Write your message on the shield.
4. Hang the door sign from your door handle.

Posted by Rupert Matthews at 01:18