Prisoners of War as Gladiators in Rome 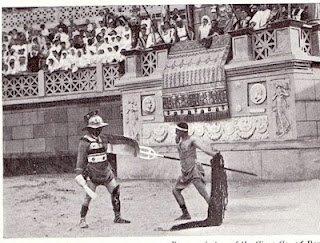 Prisoners of war fought in the arena
Between 250bc and 100bc the Romans fought many wars against foreign enemies. Prisoners captured in these wars were sold as slaves in Rome. Captured soldiers were highly valued as gladiators and were made to fight in the arena, using their native weapons and armour.


The Samnites had the best weapons
The Romans fought a long series of wars against the Samnites between 343bc and 290bc. These men each carried a large, oval shield and wore a helmet with cheek pieces. Samnites were famous for having top quality swords and spears.


The Thracians had the strangest weapons
The men from the kingdom of Thrace carried small shields and wore helmets with crests. They were famous for being able to hit any target with their spears and carried short, curved swords. This mix of weapons proved very popular and many gladiators adopted these weapons. They became known as Thracians, even if they were not from Thrace.


The Celts had the finest clothes
The Celts were the only people ever to have captured Rome, in 390BC. They lived in northern Italy and across much of Europe. Celts loved to dress in brightly coloured clothing and painted their bodies when going into battle. The Romans forced many Celtic prisoners to fight in their native clothes and with native weapons.


The Numidians fought on horseback
Numidia was an area of northern Africa in what is now Algeria. The area was famous for breeding top quality horses and its army included large numbers of cavalrymen. Prisoners of war from Numidia were mounted on horses when they appeared in the arena.
Posted by Rupert Matthews at 01:09