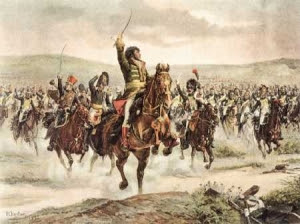 King Frederick William of Prussia had remained neutral during the War of the Third Coalition because Napoleon had promised him that a French victory would see the Kingdom of Hannover being ceded to Prussia. In August 1806, however, Frederick William heard that Napoleon had offered Hannover to Britain as part of a proposed peace treaty. The Prussian monarch was furious and declared war.
The Prussian army was over 200,000 strong, but was equipped with old fashioned weapons and used equally outdated tactics. The army commander, Ferdinand of Brunswick, was aged 71 and had failed to study the new style of warfare. By late September, the Prussians were massed near Amberg, while Napoleon was in northern Bavaria just to the south. Brunswick divided his army into two leading the western force himself while Prince Hohenlohe commanded the eastern column.
Napoleon did not realize the Prussians had divided. He led four corps against Hohenlohe’s force thinking this was the entire Prussian army. Meanwhile two French corps, those of Davout and Bernadotte, were sent to march around the rear of the Prussians. Napoleon with 56,000 men and 70 cannon met Hohenlohe with 50,000 men and 120 guns at Jena. After a lengthy battle, Hohenlohe’s force retreated in disorder pursued by French cavalry.
Meanwhile, Davout with his 20,000 men and 40 guns had run into Brunswick with his 54,000 men and 230 cannon at Auerstadt. Davout fought a skilful delaying action, managing to frustrate the Prussian attacks. Brunswick was killed during the fighting and his deputy, Scharnhorst, then pulled back, opting for an orderly fighting withdrawal. The Prussians had lost 40,000 men and 200 cannon, while French losses totaled 11,000 men.
Napoleon moved to occupy Berlin, stripping the city of food and horses for his army.