The Birth of the Great Western Railway GWR 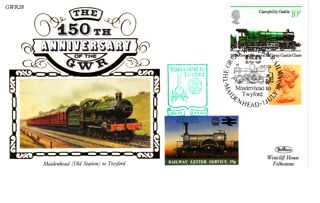 Of all the lost railways of Berkshire none was so magnificent in conception or design as the original Great Western Railway, so prestigious and impressive that it soon acquired the nickname of “God’s Wonderful Railway”. Although the GWR was to survive, it did so only in greatly modified form and function. That which remains is still impressive, but is but a shadow of the original vision that drove the company on.

The GWR was born in Bristol in the autumn of 1832 when a group of merchants in the city got together to discuss their transport problems. These were considerable. Bristol was a major port for the Atlantic trade with hundreds of ships each year putting in to load cargoes to be distributed throughout southern England, or to pick up cargoes for export over the world’s oceans to the British Empire. To make their money, the merchants had to be able to guarantee that the goods could move cross country with speed and reliability. That was where the problems set in.

The bulk of the goods landed at Bristol went east to London and southern England. In 1832 the main route was on barges that were pulled by horses up the Avon to Bath, then along the Kennet and Avon Canal to Reading, thence down the Thames to London. Unfortunately the Avon was notoriously prone to floods in autumn and the canal was often closed in winter when the water froze. Meanwhile the Thames was prone to run so low in the summer that the barges grounded on the shallower sections. A journey that in theory lasted a week could often last more than a month. The only alternative was to transfer goods from barge to cart, but carters typically charged three times as much as the bargemen.

One of the Bristol merchants, sadly history does not record which one, brought to the meeting the second Annual Report of the Liverpool and Manchester Railways Company. The report stated, with numerous charts and tabulations, that the railway moved goods twice as fast as the swiftest cart but cost only half as much as moving goods by canal. The merchants were quickly convinced that what they needed was a railway from Bristol to London. A committee of senior merchants was set up to investigate the matter.

The committee did not delay for long. In March they hired a promising 26 year old engineer who was in Bristol at the time designing a bridge over the Avon at Clifton. His name was Isambard Kingdom Brunel, and he was destined to become the greatest engineer Britain has ever produced. Brunel hired a team of surveyors and quickly set about finding a route suitable for a railway.

Posted by Rupert Matthews at 01:06