Xerxes arrives to watch the battle at Thermopylae 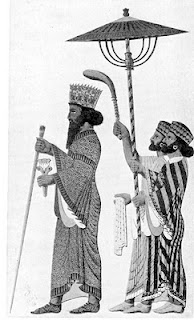 The first signs of action would have been a force of Persian troops marching out of camp towards the West Gate. These men would undoubtedly have been royal guards from the unit known as Immortals. On campaign most Persians wore the more convenient dress of the Medes, but these men would have been drawn from the crack 1,000 Royal Guards and they were there to make a show. It is likely, therefore, that they marched into action  arrayed in the finery of the Persian nobility.

These robes swept down to the ankle and wrists with great billowing folds of brightly coloured cloth. Each man had his own pattern of embroidery and patchwork so that the mass must have shimmered like a rainbow on the march in the early morning sun. Each man carried a brightly decorated quiver over his left shoulder which contained his bow as well as his arrows. The 2 metre spear was tipped with an iron head, burnished to silvery sparkle, while the butt end was a gilded silver pomegranate as large as a man’s fist. The men habitually carried the spear point downward so that the gilding of the butt would catch the sunlight as they marched.

Behind this imposing display of armed might would have come a small army of workmen. No doubt these men were drawn from the ranks of the more primitive nations marching with Xerxes, such as the Mysians or Milyae. These men were poorly armed and may have been brought along to undertake exactly this sort of ground levelling manual labour.

The Greek scouts in the West Gate will have fallen back before the Persians. One would have been sent scampering back to the Phocian Wall to alert Leonidas, while the others kept a wary distance from the advancing Persians.

But the glittering ranks advanced only a short distance on to the plain from the West Gate. There they formed a defensive line and came to a halt. Behind them the workmen swarmed up the hillside to begin their work. Attacking the ground with shovels, pickaxes and spades they would have cleared and levelled an area of ground on which the throne could sit. Then the throne would have been manhandled up the slope and put into place. Tents, banners and sunshades would have followed until the small platform of level ground resembled nothing so much as a gorgeous and brightly coloured pavilion.

Finally, Xerxes himself would have appeared. Accompanied by his officers and advisers, plus a host of servants, the Great King would have walked through the West Gate, turned to his right and mounted the hill to take his place on his throne. Secretaries sat at his feet ready to write down whatever was Xerxes’ will. Messengers hung around nearby to take his orders to the army. Commanders waited patiently for the king’s pleasure. All was at last ready.

All this can be reconstructed from the single sentence in Herodotus that “Xerxes watched the battle from his seat”, from studying the topography of the battlefield and an understanding of how the Persian army operated. In a similar way it is possible to describe a plausible reconstruct of much of the course of the fighting.