Truths and Myths about the Spanish Armada 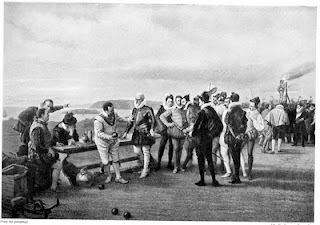 The Spanish Armada of 1588 was passing into legend even before the last ships of the ill fated fleet struggled back to Spain. It suited the propaganda purposes of England’s Queen Elizabeth to claim divine assistance, so it was put about that “God blew, and they were scattered”. Credit was being given to God for the works of man.

Thereafter the myth makers and balladeers got to work with a will. Incidents were romanticised, invented or forgotten. Individuals raised to the status of hero by storytellers and historians, while those less lucky were written off as cowards or blamed for the faults of others. Within just a few years the general public across Europe had been presented with dozens of written versions of the story of the campaign, most of which had been written with a clear political motive which pushed truth and accuracy out of the way.

Another legend that began early was the story of Drake playing a game of bowls. According to the story as it was most often told, Drake and Lord Howard of Effingham were in Plymouth with the English fleet awaiting news of the Spanish Armada in July. With nothing much to do but kick their heels, the senior officers went up to Plymouth Hoe, a broad grassy hill just outside the town, to play a game of bowls. As they were playing a messenger came racing up to announce that the dreaded Armada had been sighted, and that it was closer than expected. The ships’ captains, senior commanders and even Lord Howard began to dash about in a panic, sending out orders and then countermanding them in their haste to get to sea. Drake’s voice then boomed out calling on them for silence. The agitated mob turned about to see Drake calmly taking up his stance to bowl his ball. “There is time to finish our game and beat the Spaniards too”, said Drake. Instantly the hubbub was calmed and the game went on even as the Spanish masts came up over the horizon.

As we shall see, this particular legend had a real basis in fact.