What were the origins of the Eisteddfod? 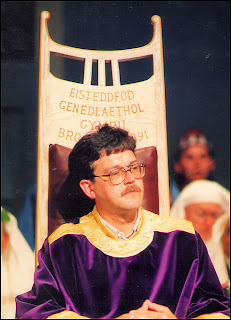 Billed as a traditional celebration of Welsh poetry, song and culture which dates back to pre-Roman times, the Eisteddfod is in reality a fairly modern invention. But that does not make it any the less impressive.


It was in 1792 that a group of Welsh Bards paraded through London to Primrose Hill where they erected a circle of stones, unsheathed a sword and placed it on a Maen Gorsedd stone, performed some ceremonies and then sheathed the sword again. It was this event which brought the existence of the Welsh bards to the notice of Society and launched the modern Eisteddfod.

In fact, the Welsh Bards had been performing since time immemorial and there is every reason to believe the claim that the institution dates back, one way or another, to before the coming of the Romans. In ancient Celtic society the Bards held a distinguished and much-honoured place. It was they who kept alive the memory of dynastic history through their  songs and epic poems. Kings and chieftains always gave an honoured place to any passing bard, and often had their own resident bard to compose songs and poems in praise of their families.

The coming of Christianity broke the previously close link between the bards and the druids. It also somewhat reduced their social standing.  However their calling was still considered  important and by the 1150s the bards had formed themselves into a type of loosely organised guild known as the Court. This Court met occasionally to settle disputes between members, accredit hopeful Bards and to hold competitions and give awards for poetry and music. The large national meetings went by the name of Eisteddfod.

In the 16th century the Welsh Tudors sat on the throne of England and made great efforts to tie the two nations together. Among the Tudor innovations was to make the Court responsible for the behaviour of the travelling bards. England and Wales were plagued by unemployment and the problem of  ‘sturdy beggars’, those who gained alms by intimidation, was growing. In Wales beggars often tried to evade the rules by claiming to be in gainful employment as travelling bards, and it was felt the Court was the best placed to judge their claims.

The Court continued to hold their Eisteddfods for generations, but gradually the size of the gatherings and quality of the work declined. Traditional Celtic poetry was highly complex. Not only did it have a complicated metre and rely upon difficult rhythms and rhymes, but it also had a complex system of metaphors and allusions which a bard was expected to understand. There was also a large body of oral material which a fully qualified bard should know by heart and be prepared to recite at short notice.

Everything You Need to Know About the British: 200 Insights into Our Way of Life by Rupert Matthews

Posted by Rupert Matthews at 01:30