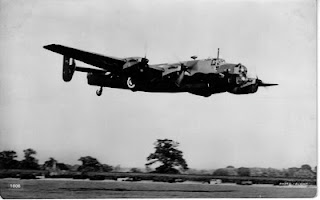 By the time Sir Arthur Harris, the head of Bomber Command, sent his main force of bombers back to Germany after the D-Day campaign things had changed. The photos brought back by high-flying Mosquitoes were providing the “boffins” with unparalleled details of potential targets. And the top secret “Ultra” code breaking station was providing much vital information.

It was soon clear that the Bomber Command campaign of area bombing German industrial cities was proving to be horribly effective at reducing German weapons output. There were still industrial centres that offered viable targets for area bombing, but there were now two new priorities. The first was oil, for the Reich had now lost control of the oilfields of southern Russia and was desperately short of fuel. Oil supply facilities had been a priority target for Bomber Command before, but the small targets involved had been difficult to hit at night.

Nothing had changed by 1944, which was why a force of Halifaxes of 463 Squadron left Foulsham on 6 October to bomb the oil plant of Sterkrade in daylight. On his 18th sortie was Sergeant Cecil Baldwin the bombaimer. On the immediate approach to the target the aircraft was hit by a flak shell that started a major fire. The pilot, Flying officer Edward McGindle, ordered the crew to bale out, but as the third man dropped clear a second flak shell hit the aircraft wounding Baldwin slightly and the navigator more seriously.

Baldwin reported to McGindle that the navigator was too badly wounded to use his parachute, then turned to bind the man’s wounds. The pilot decided to try to reach Norfolk in the damaged aircraft. He turned away to the west, ordering the wireless operator, Sergeant Edward Whelan, to tackle the fire. Baldwin, who had had some elementary training as a navigator took over the wounded man’s station and navigated the aircraft back cross the North Sea to England.

The flight engineer, Sergeant Stuart Soames had meanwhile been trying to keep the damaged port inner engine going, but eventually gave up the struggle and switched it off. He then walked to the rear of the aircraft to inspect the damage, reporting back that the tail control surfaces were badly shot about and most of the fuselage skin burnt away. He then nursed the wounded man for the rest of the trip. It was not until the aircraft crossed the coast that Baldwin told Soames that he had been wounded, by which time he had lost so much blood that he passed out. McGindle managed to put the damaged bomber down safely at his home base.