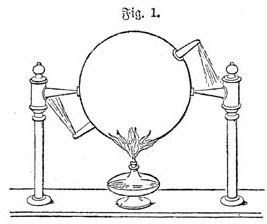 Heron of Alexandria (fl.1st century ad) was an Egyptian inventor who developed a series of machines for use in temples that used steam power, rising smoke and other principles. One invention was a slot machine that used the weight of a falling coin to dispense a measured amount of holy water to worshippers. Another used air expanding from a sealed metal ball inside a fire lit on a sacrificial altar “miraculously” to open temple doors up to 100 feet away. He also developed a metal ball linked to a kettle that could be made to rotate at extremely high speed when the water in the kettle boiled.


Polybius (fl.150bc) was a Greek soldier who invented a system of long distance communication for use by the military. The key to the device was a grid of letters arranged in numbered rows and columns. A soldier would wave a flag, by day, or a torch, by night. By waving to the left he would show the row and by waving to the right the column of the letter indicated. The limits of the naked eye meant that a signal could be sent only over a distance of a mile, but relays of signallers could send a message over a vast distance very quickly. This was why the Romans, who adopted the system, built small towers at one mile intervals along boundary fortifications such as Hadrian’s Wall.


The Chinese court scientist Chang Heng (fl.132) invented a seismograph, or earthquake sensor. This consisted of an inverted pendulum set inside a bronze jar and linked via a system of rods and levers to eight dragon heads, in the mouth of each of which was a small ball. When an earthquake struck, no matter how slight, the jar moved with the ground, but the pendulum stayed still. This caused the system of rods to move and push out a ball from the mouth of the dragon facing the direction from which the shock had come. A replica built in 1939 worked perfectly.