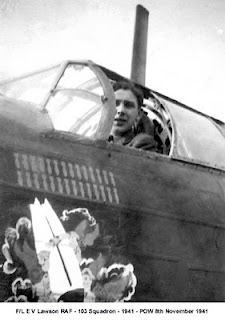 A raid on Cologne on 31 October 1944 showed up two of the routine hazards encountered by the crews of Bomber Command, and both happened to aircraft of 153 Squadron.

Just after take off, Squadron Leader Gee found his airspeed indicator was not working. The navigator was able to guide the aircraft to Cologne and back more or less on schedule, but the real danger came on landing. Gee tried to gauge his speed, but darkness covered the landscape and it was not until he touched down that he realised he was going far too quickly. The brakes were jammed on full, but even so the heavy bomber missed a building only narrowly and shuddered to a halt just feet from the perimeter fence.

Meanwhile, over Cologne the Lancaster A Apple piloted by Flying Officer Wheeler. suddenly veered savagely to starboard. Thinking a flak shell might have burst under the port wing, Wheeler peered out, but could see no obvious damage. He continued to bomb on target, then turned for home. At this point a palefaced wireless operator came into the cockpit in a clear state of distress. “Skipper,” he said, “The starboard wing’s damaged”.

Wheeler now looked out the other side of the cockpit to see a gaping hole over a yard across in the centre of the starboard wing. The wireless operator then reported that he had taken up his usual position in the small perspex dome in the top of the fuselage, the astrodome, to keep an eye out for the risk of collision with other bombers in the closely packed stream. He had glanced up to see an entire stick of 1,000lb bombs hurtling down seemingly straight at him. “I was too paralysed to speak” he confessed. Most of the bombs missed A Apple, but one had hit the wing. Wheeler got his aircraft back safely.

The Lancaster “Q Queenie” piloted by Flying Officer Williams completed the Cologne mission without incident, but on coming in to land before dawn the aircraft suddenly lurched upward and sideways. Only with great skill did Williams regain control of the bomber in time to put it down on the runway. Having parked the bomber, the crew climbed out to find leaves and twigs jammed in the undercarriage. Clearly Williams had clipped the top of a tree unseen in the darkness.

Such were the dangers faced by the crews of Bomber Command, even when the Germans were not trying to kill them.