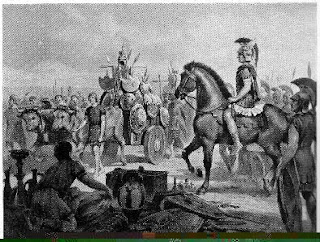 Alexander relied on the seven men who held the formal title of Bodyguards. These senior generals and leading noblemen made up the command council or senior staff of the Macedonian army. Alexander, as king, was obliged to listen to their advice, though the decision was his alone.

These were all experienced and skilled military men. The most respected of them all was Parmenio. Aged 66 years of age by this date, Parmenio had spent his entire adult life in the saddle. He had begun his military career under King Amyntas II of Macedon in around 380bc. As a young man he saw Macedon overrun by wild Illyrian tribesmen and, for a time, went into exile along with Amyntas. The king found support among the Thessalians, returning at the head of a large army of Thessalian horsemen. The Macedonians rose to support him and the Illyrians were expelled.

Parmenio worked his way up through the command ranks of the Macedonian army under Amyntas and saw much campaigning against the Illyrians and Epirots. It was during the reign of Amyntas that the hill tribes of Upper Macedonia were brought under more direct rule by the Kings of Macedon. Until then the kings had ruled directly only the lowlands and exercised only a vague sort of control over the hill tribes. How much fighting was involved in this we don’t know, but Parmenio would have been involved in what there was. In later life Amyntas narrowly survived an attempt at a palace coup organised by his wife. Executions followed, but Parmenio must have chosen the winning side as he survived.

When Amyntas died, Parmenio was a fairly senior, but not top ranking commander. The new king Perdiccas, did not survive long as he was killed invading Illyria. Perdiccas left an infant son, Amyntas, with his own adult brother Philip as regent. Philip wasted little time getting the army on his side and then ousted Amyntas. It must be presumed that Parmenio had played some role in the coup as he was immediately favoured and promoted by Philip.

When Philip in turn died, Parmenio had been in distant Asia with the advance guard of 10,000 men sent to prepare the way for the invasion of the Persian Empire. His second in command was the nobleman Attalus, great uncle of the young prince who was Alexander’s half brother and main rival for the throne. When men arrived from Alexander with orders to execute Attalus, Parmenio let them do their work despite the fact that his daughter was the wife of Attalus.

Parmenio had thus survived three major rounds of executions among the Macedonian nobility, each linked to a different attempt to put a new king on the throne. He must have been as wily a politician as he was a successful general. His relationship to Alexander is not entirely clear. He was certainly a supporter of the young king and one of the inner circle of Bodyguards. Parmenio’s son, Philotas, was a boyhood friend of Alexander’s. Although the two youngsters had never been particularly close, Alexander had appointed Philotas to command the companion cavalry as the expedition to Asia set out from Therme.

Perhaps it is best to see Parmenio as a much respected advisor, but not a man who was very close to Alexander on a personal level. There are some hints that in times of crisis the veterans of Philip’s army were inclined to look toward Parmenio, not Alexander. This would have been perfectly understandable for men risking their lives on campaign, but must have rankled with Alexander who was, after all, both king and commander in chief. This tension between the young king and his older, more experienced second in command would later become more pronounced. It did, however, exist at this time and must have served as the background to the dispute that now followed.