The morning of the Battle of Crecy - The French 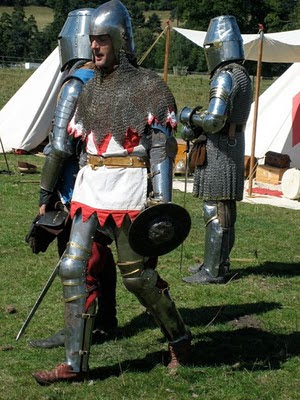 The morning of 26 August 1346 dawned bright and clear over northern France.

At Abbeville King Philip of France awoke early, along with the vast army he had gathered to crush the English invaders. His first duty was to hear mass at the Abbey of St Peter, for a Christian king had to set a good religious example on such a day. According to Geoffrey Baker, Philip held a quick council of war with his senior commanders to decide how best to proceed.

Late on the evening of 24 August the English had chased the survivors of du Fay’s force who had fled west as far as the gates of Abbeville. Those manning the walls of the town had watched the English horseman as they came to a halt outside crossbow range and rode about scouting the town. The Englishmen had then left, riding northwest into the setting sun and keeping close to the banks of the Somme.

At dawn next day columns of smoke had been seen rising from Le Crotoy, indicating that the English were in that direction. While the army rested Philip had sent out scouts to find the English and discover what they were doing. Those who rode along the Somme clashed with English scouts near Noyelles. The French scouts sent north toward Hesdin found a few isolated English riders moving about north of the Forest of Crecy – presumably these were Warwick, Northampton and their men scouting the ground around Crecy.

Now Philip and his commanders discussed what these reports meant. King John of Bohemia may have been almost blind, but he could see more clearly than most. He stated that the English would stand and fight. Nobody else agreed. Philip himself believed that Edward would continue to run north. Baker tells us that several French noblemen “reproached the King of Bohemia for being foolish”.

Still it seems that Philip wanted to harry and chase the English rather than trap them. Presumably he hoped that hunger and fatigue would reduce the English army to impotence and save him the bother of a major battle. He gave the order that the French army was to continue the pursuit. Le Bel says “King Philip urged his men on to follow the English”.

It must be said that the events of the campaign so far favoured Philip’s interpretation rather than that of John of Bohemia. In both 1339 and 1340 Edward had marched about northeastern France making much noise, but eventually retreating to Flanders when he ran out of food and supplies. Now, in 1346, Edward had marched across Normandy, Ile de France and Picardy making much noise, but fighting only when he had a clear advantage. He had been given the chance to fight outside Paris, but instead had run. He had been running ever since and there was nothing to indicate that he would do anything other than continue running.

Later French tradition has it that the French army set off down the north bank of the Somme towards the rising columns of smoke coming from Le Crotoy. It must be admitted that the contemporary sources do not state the direction of march. North of the Somme does, however, fit the known facts.

If Philip was determined to chase the retreating English until their discipline broke down and supplies ran out, then this was the correct way to go. If he had marched directly north to Hesdin, the English might have turned around and slipped behind him past Abbeville and marched east. Edward had already pulled off a similar stunt at Poissy and might be expected to try it again. If he did, the English would again be a day or two ahead of Philip and so would have enough time to capture a town or two and so replenish their supplies.

But if Philip marched to the north end of Blanchetaque, picked up the English trail and followed it he would ensure that he was following the English step by step, keeping his sword in their backs. The countryside had been stripped bare of food, now stored in castles and towns. There would be no time for the English even to think of attacking a fortified position with the French hurrying them along. It was a sound strategy and fits in well with le Bel’s comment.