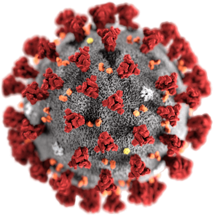 Yesterday I have my talk on "Plagues, Pandemics and Covid-19" to a History Club in Sussex via Zoom.

This is - inevitably -  a fairly grim talk but fascinating nonetheless. And in the end it has a message of hope to us all. Humanity has survived far worse diseases than Covid-19. Have a look at this map of the spread of the Black Death across Europe. Up to half the people in Europe were wiped out, and the population did not recover for 400 years. Compared to that, Covid-19 is barely a ripple on the story of humanity - tragic as the disease is for those who suffer from it. 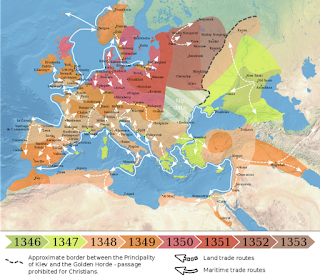 The talk also looks at how sciene and medicine has struck back on disease. We cover the micro-organisms that cause disease, how they affect a human body and how they spread. That allows the talk to look at pre-modern efforts to combat disease - be it prayer, quarantine or witchcraft - before looking at the first vaccinations against smallpox - as caricatured here by a contemporary print. 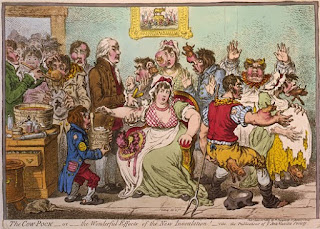 The talk also looks at the first outbreaks of what are now familiar diseases, such as when measles [below] first came to Europe. As a new disease hitting a population with no immunity, measles caused millions of death and untold misery. I also explain who such a devastating deadly disease could settle down to become a relatively mild childhood disease. 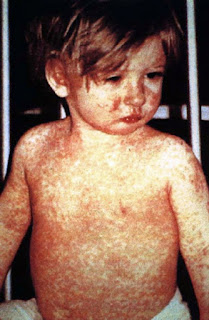 But this talk is really a historical overview of the impact disease has had on humanity. The mass deaths of the Black Death and recurrant outbreaks of plague [below] radically altered society, government, religion and the economy of Europe. It changed the direction of history, and we are still living with the consequences. Similarly the cocktail of diseases that European explorers brought to the Americas caused a massive death toll among the Native Americans - up to 95% - and opened the way for European settlement of the New World far more than did guns, technology or numbers. 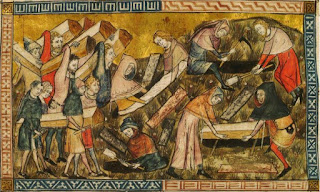 The group I spoke to yesterday were particularly interested in the way that disease organisms are subject to the same evolutionary pressures as other plants and animals. Generally this works in the direction of making diseases milder in their impact on the human body, but more infectious. That has been the story of nearly all diseases to afflict humanity - with the noticeable exception of Spanish Flu which became more deadly as time passed because of the way human doctors treated it. A warning for the future.

Offer a range of over 20 talks, mostly on history subjects. Find out more on my website.