Grinling Gibbons (4 April 1648 – 3 August 1721) was a Dutch-British sculptor and wood carver known for his work in England, including Windsor Castle and Hampton Court Palace, St. Paul's Cathedral and other London churches, Petworth House and other country houses, Trinity College Oxford and Trinity College Cambridge. Gibbons was born and educated in Holland of English parents, his father being a merchant. He was a member of the Drapers' Company of London. He is widely regarded as the finest wood carver working in England, and the only one whose name is widely known among the general public. Most of his work is in lime (tilia) wood, especially decorative Baroque garlands made up of still-life elements at about life size, made to frame mirrors and decorate the walls of churches and palaces, but he also produced furniture and small relief plaques with figurative scenes. He also worked in stone, mostly for churches. By the time he was established he led a large workshop, and the extent to which his personal hand appears in later work varies.

The diarist Evelyn first discovered Gibbons' talent by chance in 1671. Evelyn, from whom Gibbons rented a cottage near Evelyn's home in Sayes Court, Deptford (today part of south-east London), wrote the following: "I saw the young man at his carving, by the light of a candle. I saw him to be engaged on a carved representation of Tintoretto's "Crucifixion", which he had in a frame of his own making." Later that same evening, Evelyn described what he had seen to Sir Christopher Wren. Wren and Evelyn then introduced him to King Charles II who gave him his first commission - still resting in the dining room of Windsor Castle. 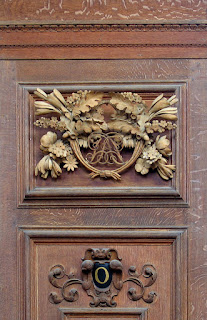 Posted by Rupert Matthews at 23:58