Heroes of RAF Fighter Command in Kent - a Preface

Heroes of RAF Fighter Command in Kent - a Preface

As the title of this book suggests, the main subjects are the men such as Ron Ramsden who fought in the RAF during the war, and particularly those who flew from Kent. For those readers with a wider interest in the RAF who want to learn more about Fighter Command or Coastal Command as well as about the airfields and unit histories I can do no better than advise you to purchase “Kent Airfields in the Second World War” by Robin J Brooks, also published by Countryside Books, which makes a fine companion volume to this.

Of course, a book like this cannot possibly be the work of just one person. I would particularly like to thank Paul Lazell for permission to use photos taken by his father  during his extensive career in the wartime RAF. Copies of these and other photos are available from Paul for a modest fee on paulsdadsphotos@aol.com. In this book his photos are indicated as [Paul Lazell]. I must also thank Ft Lt Andrew Smith for his invaluable introductions to various RAF personnel serving and retired. Shaun Smith, a retired RAF officer, has also helped out. I have made every effort to track down the copyright holders of material that I have used, but if I have missed anyone out please accept this as a genuine mistake and contact me so that matters can be put right in any future edition.

Kent is fortunate in having three magnificent museums devoted to the RAF. The RAF Manston Spitfire and Hurricane Memorial Trust has a museum just outside Kent International Airport (formerly RAF Manston) which houses a Spitfire and a Hurricane, plus a vast amount of other items and memorabilia. The Trust has been particularly helpful to me in producing this book and I would urge anyone interested in this subject to pay them a visit. In this book their photos are indicated as [Manston S&H Mem]. The nearby RAF Manston Museum is again worth a visit. In this book their photos are indicated as [RAF Manston Mus]. I would like to thank Brenzett Aeronautical Museum for their help and for permission to use photographs of their exhibits in this book. The museum stands in Ivychurch Road, just off the A2070, and is well worth a visit and full details  can be obtained on their website http://www.brenzettaero.co.uk/. They have some particularly fine interactive exhibits for children of all ages. In this book their photos are indicated as [Brenzett AM].

Finally I must thank my wife for her patience and my daughter for her numerous interruptions.

from "Heroes of RAF Fighter Command in Kent" by Rupert Matthews

Get your copy on Amazon 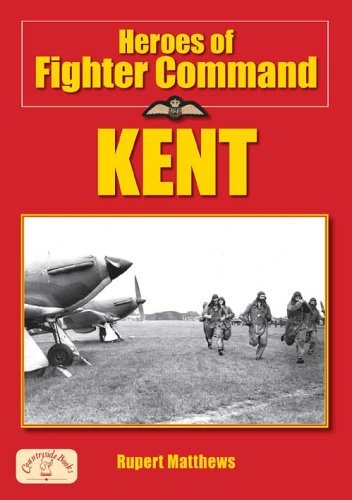 Posted by Rupert Matthews at 23:56