Cardigan and the cardigan

James Brudenell, 7th Earl of Cardigan earned great fame as the man who led the heroic, but futile Charge of the Light Brigade at the Battle of Balaclava in 1854. He was one of the richest men in Britain and spent a fortune equipping his regiment, the 11th Hussars, with the finest equipment and uniforms. He insisted on aristocratic manners and once courtmartialled an officer or ordering beer, instead of wine, at dinner. He challenged another to a duel for turning up for dinner with improperly polished buttons. Undoubtedly brave, his prickly temperament and unpopularity with more senior officers led to his retirement in 1866. The cardigan, a knitted jumper that buttons up the front, was named in his honour.

from "Heroes, Rascals and Rogues" by Rupert Matthews
Buy your copy HERE 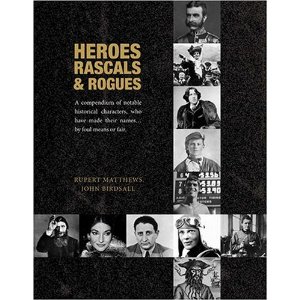 Publication Date: 1 Nov 2008
Written by expert authors Rupert Matthews and John Birdsall, this highly illustrated guide, with photos and memorabilia of people who have made their mark on history, includes key entries on each individual, with boxes and biographies about competitors or co-conspirators. With more than 400 extraordinary people in total it is a fascinating look at some of the most colourful characters in history - from ancient times right up-to the present day. Discover why Caligula was mad, what made Napoleon seek to conquer, and who was really was the most outlawed cowboy in the West.But, on the flip side of 'the coin of fame', meet the people who have made their name by heroic acts or astonishing feats of human endeavour. Find out who first broke the four-minute mile, and what drove him on; which astronaughts have been lucky enough to view the Earth from space; and who is the youngest war hero ever to be decorated. "Heroes, Rascals and Rogues" takes a look at some of the most unconventional people to have lived among us, in an easy-to-read, illustrated format with interesting facts and figures that will make this book hard to put down.
Posted by Rupert Matthews at 02:01