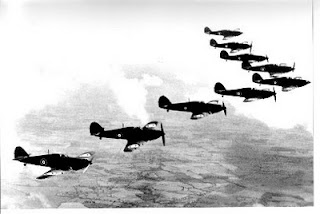 After the change of higher command within Fighter Command towards the end of 1940 there was a rethinking of strategy. It was now clear that any German invasion of Britain could not take place until the good weather of spring arrived again in April or May 1941. The head of Fighter Command, Sholto Douglas, was confident that with the increasing numbers of pilots and aircraft arriving under his command over the winter he would be able to stop the Germans gaining control of the air. Nevertheless a good deal of planning and preparation went on so that Fighter Command would be ready for the fray when it came.

Meanwhile, Douglas had to keep his men busy over the winter. He was as determined to keep his own men in training and ready for action as he was to probe continually and test the strength of the Luftwaffe across the Channel.

The attack on Le Touquet airfield by two Spitfires in December had shown the way forward. These low-level, high-speed missions by two or three fighters were dubbed “Rhubarbs”. A similar mission but carried out with an entire squadron was designated a “Rodeo”. While Rhubarbs could be suggested by squadrons and approved by Group HQ, Rodeos had to be authorised and planned by Fighter Command HQ. “Jim Crows” were regular patrols that were carried out day after day along set routes to search for enemy activity. Most of them took place over the Channel.

Rather more formal, in that they had a definite objective, were “Ramrods”. These were bombing missions undertaken by the squadrons of RAF Bomber Command to which Fighter Command was expected to provide fighter cover. Most such missions had one force of fighters providing cover to the bombers on the way out, with a second force taking off later to escort them back when the first group of fighters began to run low on fuel.

Altogether different were the “Circus” missions. These were designed to appear to the Germans as if they were a normal Ramrod, but in fact were structured so that it was Fighter Command that took the lead. The bombers were present only in small numbers and were there simply to give the illusion of a bombing mission. In fact the half a dozen or so bombers were escorted by as many as fifty or more fighters. The aim was to lure the German fighters up to attack the bombers, then for the British fighters to pounce on them in overwhelming numbers.

Posted by Rupert Matthews at 07:02