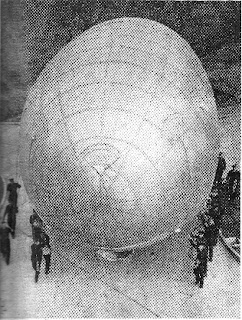 The defence of Britain from night bombing in 1940 and 1941 did not rely entirely on fighter aircraft. Also operating under the control of Fighter Command were the barrage balloons, searchlights and anti-aircraft batteries. Like Fighter Command, the ground-based defences had suffered from under investment between the wars and even by the autumn of 1940 were not up to full strength.

The Balloons were under the command of Air Vice Marshall O. T. Boyd OBE MC AFC, who had his headquarters at RAF Stanmore conveniently close to Bentley Priory. He divided his forces into Groups, matching those of Fighter Command. According to the plans of the War Ministry, Boyd should have had over 2,000 balloons, but in fact had only 800.

Barrage balloons were large gas-filled balloon shaped rather like a torpedo with large fins at the rear. They were connected to the ground by a tough steel cable by means of which they could be raised and lowered. From the balloons trailed a number of thinner wire cables that dangled down and blew about in the wind. In theory balloons were able to destroy any aircraft that flew into their cables – and several enemy bombers were in fact brought down in this way.

In practice, however, their main role was as a deterrent. Bomber pilots preferred not to go down lower than the balloons for fear of hitting the cables. When there was low cloud, the balloons could be positioned just beneath the cloud, thus blocking any bombing run. In clear weather the balloons were raised to their maximum height. This did not stop bombers flying higher than the balloons, of course, but did mean that they were bombing from high altitude. At this date bombsights did not allow for accurate bombing from much above 10,000 feet, so balloons could spoil the enemy’s aim even if they could not stop him bombing entirely.