The Build-up to the Battle of Halidon Hill, 1333 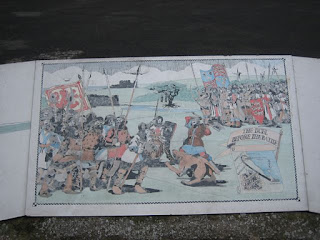 At the Battle of Bannockburn, fought near Stirling in 1314, Robert Bruce had defeated the army of English king Edward II and won for himself the crown of Scotland. However Bruce’s death in 1329 reopened the long-running disputes between the Bruce and Balliol families over which had the better claim to the Scottish throne. While the victor of Bannockburn lived the Balliols accepted him as king, but Bruce died leaving only the five year old David as his heir. Edward Balliol stepped forward to claim the throne, sparking a Scottish civil war.

Events in Scotland were being watched carefully by King Edward III of England, who was keen to avenge his father’s defeat. In 1332 Edward Balliol lost the civil war and fled to England. He asked Edward for military help, promising in return to honour the agreement made by William of Scotland after the Second Battle of Alnwick and acknowledge the King of the England as his feudal superior. Edward insisted on one more concession, the return of Berwick upon Tweed to England, and then mustered an army to march north against Scotland.

Edward laid siege to Berwick, held for David Bruce by Sir Alexander Seton, on 12 April 1333. Realising that the defences were too strong to storm, Edward decided to starve the garrison out. A small watching force was left to blockade Berwick while Edward marched north to capture and burn Edinburgh. Much to Balliol’s disappointment this did not cause the Scottish nobles to make peace. Edward, having no wish to be sucked into a long campaign inside Scotland, returned to Berwick, which he reached in June.

A large Scottish army led by Lord Archibald Douglas followed the English south from devastated Edinburgh. Rather than join battle, Douglas led his force around Berwick to lay siege to Bamburgh. The English queen was in residence at Bamburgh and Douglas hoped that the threat to his beloved wife would cause Edward to abandon the siege of Berwick, allowing the Scots to move in enough supplies and reinforcements to enable the town to hold out. The rather ungallant ruse failed. Edward stayed at Berwick.

Food in Berwick had now finally run out, so on 15 July Seton agreed to surrender Berwick on 20 July if he was not relieved by that date. Douglas now had no choice but to attack the main English army in open battle. He abandoned the siege of Bamburgh, crossed the Tweed and marched towards Berwick.