A Walk around Penshurst, Kent, and some nice tea and cakes 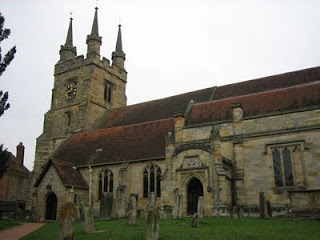 
1) Find the car park on the southwestern edge of the village in Fordcombe Road, the B2188. On exiting the car park turn right to head north along Fordcombe Road. At a T-junction with the B2176, Penshurst Road, turn right. You will pass Quaintways Tea Rooms  on your right. After about 50 yards turn left to enter the churchyard through perhaps the most unusual lychgate in England.

It is not the gate itself that is odd, but the fact that some time around 1550 a local man decided to build his home up and around the gate. The house is still there, complete with knarled oak timbers, bulging walls and sagging roof. It forms a weird form of domestic arch over the lychgate.

Once through the gate you will find yourself in the churchyard of the Church of St John the Baptist, the four towering pinnacles of which make this the tallest building for miles around. The church was begun in the 12th century, and then saw assorted enlargements and alterations in the 13th, 14th and 15th centuries. Then in the early 19th century the Sidney Family added a small private chapel and paid for the entire church to be restored, renovated and generally rebuilt. The result of all this work is a strangely pleasing hotchpotch of styles and materials. One of the more interesting features is a magnificent window of 1620, again paid for by the Sidney family.

2) On the far side of the churchyard the footpath crosses a field. Penshurst Place is on your right. If you have the time to spare you could visit this stately home.

Penshurst Place has been the home of the Sidney family who did so much for the local church since 1552. The earliest of the Sidneys to achieve acclaim was Sir Philip Sidney. This elegant courtier and artist achieved fame with his sonnets, short poems and longer works on a variety of themes. He went on to write the Arcadia, which in its day outsold Shakespeare, Marlow and other writers. He also wrote The Defence of Poetry, a riposte to the growing fashion for stage plays.

In 1572 Sidney chanced to be in Paris when the horrific St Bartholomew’s Day Massacre took place. He managed to save himself from the Catholic murder squads, which butchered an estimated 30,000 Protestants over a six day period, by seeking refuge in the home of the English ambassador. Other Protestants were not so lucky and were cut down even as they reached the steps of the house. The brutality of the event changed Sidney. He still wrote poetry, but spent rather more time on military campaigns. He joined the Dutch Protestant rebels fighting against the Catholic monarch Philip II of Spain. In 1586 he was badly wounded fighting in the Battle of Zutphen, but famously handed his water bottle to a wounded comrade saying “Thy necessity is yet greater than mine”. He died a few days later.

The Sidney family, meanwhile, prospered. They later rose to be Earls of Leicester, but when the direct male line died out so did the title. The Sidneys are today the Barons de l’Isle and Dudley. The great house in which they live began as a fairly modest manor house in 1340, some parts of which remain. The Hall, for instance, is reckoned the finest medieval feasting hall to survive virtually unaltered anywhere in Britain. The house was extensively rebuilt in Tudor times and it is this which forms most of Penshurst Place as it stands today. The house contains a magnificent collection of table services and of arms and armour - including the helmet Sir Philip was wearing when he received his death wound.

The house and gardens are open daily from early April to late October. At other times of the year you should check opening times on their website www.penshurstplace.com/ or by phoning them on 01892 870307

From Teashop Walks in Kent