The Tasks of a Pharaoh 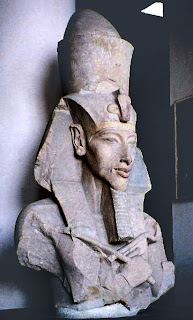 Into Battle
One of the main tasks of the pharaoh was to lead the army during times of war. During the time of the New Kingdom the most important part of the army were the chariot units. These light vehicles galloped around  the battlefield while archers shot arrows at the enemy. Pharaohs rode into battle on chariots.


Army Organisation
The Egyptian army was divided into units named after gods. Most men in each division were infantry armed with shields and either spears or swords. Most Egyptian shields had a rounded top and a flat bottom. The infantry formed up in solid masses when going into battle.

The Sea Peoples
In around 1220bc Egypt was attacked by warriors from the north who arrived in ships. The Egyptians called these invades the Sea People. The Sea Peoples were finally defeated by Raises III in 1163bc. The warships of Raises III were designed to carry soldiers to attack the ships of the enemy.


The Sed Festival
Each pharaoh had to prove that he was fit and active enough to continue to rule by performing the Sed festival every 12 years. During the festival the pharaoh had to run a course around stone pillars set up in the desert within a set period of time. If the pharaoh finished within the set time he was thought to have proved that he was fit to rule. There then followed rituals at the temple.


The Window of Appearing
Every day the pharaoh had to show himself to the people by looking out of a window in whichever building he was staying in. Palaces had specially decorated windows for this purpose that were  called Windows of Appearing. This allowed people to see that the pharaoh was alive and fit enough to rule.


Dispute Settlement
It was a prime duty of the pharaoh to ensure peace and harmony. If any dispute between Egyptians could not be settled by officials, the dispute would go to the pharaoh for him to judge. The pharaoh would listen to both sides of the dispute, then announce his decision.


Quiz Question
How often was the Sed festival organised?


Games of Ancient EgyptRun the Sed
You will need:
Markers, such as sticks or pieces of cloth
A watch
Pencil and paper
A garden or park
Two or more players

First mark out the Sed course by putting the markers around your garden or in a park. Be careful not to put the markers where they will cause a nuisance to anyone else.

Take it in turns to run around the Sed course. Time the runs using the watch and write down the results with the pencil and paper.

The player who completes the course in the fastest time is the Pharaoh.


This is an extract from Action Files Egypt by Rupert Matthews.

Posted by Rupert Matthews at 09:49